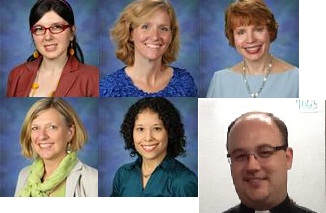 Untucked shirts, loosened ties, empty backpacks, coupled with ear to ear grins, high-fives and talk of the summer can only mean one thing: the last day of school. While this day marks just a three-month hiatus for most, for six fabulous teachers — Ms. Erica Walker, Mrs. Danielle Bianchi, Mrs. Theresa MacLellan, Mrs. Joyce Dominguez, Mrs. Sally Metzger, and Mr. John Nugent, S.J., — this final day of school will mark their last day of teaching at Jesuit.

“A rey muerto, rey puesto.” This old, Spanish proverb literally translates:  “As soon as one goes out the window, another comes in the door.” Ms. Walker, a new teacher for the 2011-2012 school year, was the one who “came in the door,” filling the place of Mr. Quan Tran in the Spanish department.

Ms. Walker immediately began teaching Honors Spanish I and Regulars Spanish III in her first year here. In addition to her teaching, Ms. Walker has also been a faculty leader on the Kairos retreat, the first Junior Day of Service, and the Jesuit Medical Society mission trip to Guatemala.  Spanish III student, sophomore Chris Bergerson, remarked that, “Since [Ms. Walker] was new this year, I didn’t really know what to expect, but as the year grew I started to really grow fond of Ms. Walker and her fun teaching methods.”

According to Ms. Walker, she will be serving a year of domestic mission service in Chicago at St. Clare of Montefalco next year where she will be working with predominantly Mexican immigrants and living out Catholic social teaching in action. “Reflecting on my time here, I feel like I will most remember spending time with students outside the classroom and at service events and retreats.”

One of the six traits included in the profile of a Jesuit graduate is “a commitment to working for justice,” and over the last five years, no one has been more influential in developing this fundamental characteristic than theology teacher, Mrs. Bianchi. Through her FMJ class and leadership in the junior leadership group, Interact, she is in an ideal position to spread awareness about various issues and motivate students to do something about them- and that is exactly what she has done.

One of her Faith, Morality, and Justice students, Jordan Rayfield ’13, remarked: “Mrs. Bianchi has really opened my eyes to the various issues of our world today and has instilled in me the courage to do something about them.” Aside from her theology teaching, Mrs. Bianchi also acted as the Assistant Director of the Jesuit Rangerettes for 3 years, helping to choreograph the halftime shows at the Jesuit home football games.

Although Mrs. Bianchi will not be teaching here next year, she vows to stay “as involved as possible with the Jesuit community,” while also spending more time with her newborn baby and her three-year old son. “My greatest memory at Jesuit is definitely the incredible sense of community amongst the students, faculty, and staff.”

Eighteen teenage boys and one teacher going on a four-day trip to Washington, D.C. sounds like a recipe for disaster, right? Wrong. Multiple times, Mrs. MacLellan has been the headwoman for the Jesuit trip to Washington, D.C. for the National Pro-Life March, ensuring that each student has an empowering experience, while keeping them all safe at the same time. Jordan Tobolka, a junior member of the Pro-Life Club and an attendee of the March this year had nothing but kind words about Mrs. MacLellan. “She works tirelessly, not only helping her students reach their full potential with schoolwork but also shaping them into men who will be beneficial to their communities.”

Aside from the Pro-Life club, Mrs. MacLellan is also an integral part of the Ignatian Identity Committee, Eucharistic Minister group, senior retreats and the Ping Pong Club. “I, like so many others here, care so much about the students, but, for next year, I have decided to make a decision to scale back a little in my life to support my own children while they grow and develop. I am truly proud and humbled by the students as they continue to compassionately demonstrate the message of the Prayer for Generosity.”

Since 1995, the first year she taught at Jesuit, Mrs. Dominguez has been a brilliant mind in mathematics.  She has served as the math department co-chair alongside Mrs. Anne Blackford for the past 7 years. During her 17 years at Jesuit she has taught everything in the curriculum from regulars Algebra 1 to BC Calculus- the highest math class taught at Jesuit. Apart from her tireless dedication in the classroom, Mrs. Dominguez will also be remembered for her work on student and faculty retreats, the Ignatian Identity committee, the faculty life committee, and other various clubs and organizations.

Additionally, Mrs. Dominguez has been chosen numerous times by the administration to represent Dallas Jesuit at the national JSEA (Jesuit Secondary Education Association] meetings, in which one or two faculty members from every  Jesuit school in the nation come together to discuss ways to improve Jesuit education. And unbeknownst to most students, Mrs. Dominguez created the math lab, to which many students go for math help, and Pi Day.

As for next year, Mrs. Dominguez and her husband will be moving to Denver to be closer to her son and his children, where she hopes to find work at the nearby Arrupe Jesuit High School.  As she noted about her leaving, “Jesuit is more than a school-it is a family…I will miss this family.”

Many students who have called Jesuit home over the past 21 years have seen the infectious smile of Mrs. Metzger. “Whenever I go to Mrs. Metzger’s class I can bet she has that smile of hers that brightens my day when it seems awful,” said Tyler Kromkoski ’14, one of her theology students.

Known for her close relationship to God and a contagious, cheery mood, Mrs. Metzger has taught various theology classes, most recently Prayer and Sacrament to the sophomores. For the past ten years she has also led Artists for Others, a group that entertains the elderly at nursing homes and has “especially loved being a spiritual director for the senior retreats.”

Next year, according to Mrs. Metzger, she will be fulfilling her dream of becoming a “licensed hypnotist” so that she can “help people reach their worthiest goals.” Killian Womack ’14, another of her students, commented: “I enjoy the peaceful serenity and atmosphere of her class, and I think I speak for the rest of the Jesuit community when I say she is a true Woman for Others.”  Mrs. Metzger recalls:  “My favorite moment had to be a surprise party thrown by a class several years ago, a moment which, just like in all my years here, was filled with a familiar love for my students and the joy of being a teacher.”

Every three years, the New Orleans Jesuits grace Jesuit Dallas with a new scholastic- an eager, young man who is ready to make his impact on the school. In 2009, Mr. Nugent was that man, and since his start in August of that year, Mr. Nugent has been known for his challenging Chemistry classes and the music from his office that echoes down the halls of the science commons.

“I love the ‘Nuge. ’ He is very approachable and always ready to help his students excel in his class,” said sophomore chemistry student Luke Gibbons, who, like many other students, regards ‘Nuge’ not just as a teacher, but a friend.  Fr. Billy Huete, S. J., the rector here, commented: “Mr. Nugent cares more about his classes than anyone else here; he embodies what we, the Jesuits, look for in a scholastic: a good work ethic and the desire to keep learning.”

Besides his work in the classroom, Mr. Nugent was the co-moderator of the popular Ping-Pong Club this year and enjoys attending the many sports events, band recitals, and other extracurriculars. He also helped plan and put together the World Youth Day trip this summer in which students and faculty traveled to Madrid, Spain, to join millions of other youths in celebrating Catholicism.

But above all, perhaps his most distinguishing accomplishment was receiving the Patrick Koch Award this year, which is an award voted on for the first time by students to recognize the teacher that they think best embodies the Jesuit mission.

Next year, Mr. Nugent will switch roles, from a teacher to a student, at Boston College at which, “God-willing,” he will receive his master’s degree in divinity and then become an ordained priest in three years. “In my time here, I most enjoyed seeing the growth of my students throughout the year both inside and outside the classroom and observing my fellow faculty members embody the mission of the school day in and day out.”

So, these talented teachers will be missed.  On behalf of the student body and The Roundup staff, we would like to thank these teachers for their hard work and dedication to bettering our school in as many ways as possible. We wish them luck on their various endeavors in life and ask that they also keep the Jesuit experience close to their hearts. They will be missed here at Jesuit.