More
JesuitRoundup.org is brought to you by:
The Ashmore Family
Profiles Faculty & Staff A Farewell to Mr. Redding
Facebook
Twitter
Email
Print 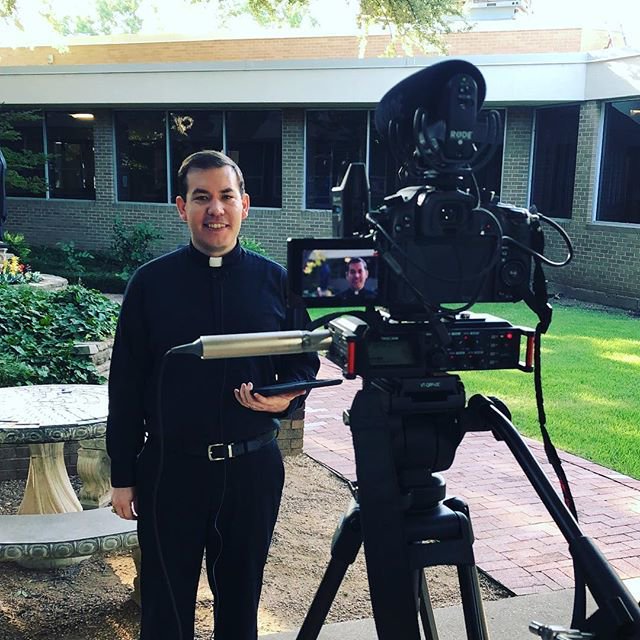 “The great aim of education is not knowledge but action.” One of the fundamental aspects of Ignatian education is this focus on acting upon our knowledge. Mr. Redding, one of the theology faculty members, has sought to transform the classroom merely from a learning environment to a place focused on answering God’s call to action.

To become a Jesuit priest, a Scholastic must teach for several years before becoming ordained as a priest, primarily because Jesuits place a large emphasis on education. This year, Mr. Tucker Redding, S.J., completed his third year at Jesuit Dallas and is moving on to continue his journey within Ignatian formation.

Q: How long have you been at Jesuit? 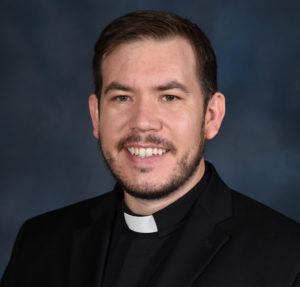 Q: What do you think you’ll miss most after leaving Jesuit?

Q: What’s been your favorite memory over the past three years?

A: “Basically, I think one of the favorite things that I’ve been able to do for the past few years is that because of my job, taking videos for campus, I get a lot of the behind-the-scene kinds of opportunities. One of the memories that I particularly love is backstage during graduations because there is this great sense of seeing all the students, who are coming off of the stage with their diplomas, and getting to see them, interact with, hug, and hang out with their counselors. Even just for a second, there is this immense moment of joy and community spirit shared between them, and getting the opportunity to see that has truly been a great experience.”

Q: Teaching Theology for 2 & 1/2 years, what has being a teacher taught you?

A: “Being a teacher has taught me that I think with any subject, especially Theology, it has to go beyond the data to actually be a part of your day-to-day life, and figuring out how it actually impacts your daily life. I feel like we ask all the time in several classes, “How will this impact me in the future?” And so to take what we are doing, and whether it be Church History or Scripture, and I know for me, I need to integrate it myself, and I want my content to be interesting because if I’m bored, you guys will be bored. I want things to be more interactive, and finding its way on how such can impact your life.”

Q: What inspired you to become a Jesuit?

A: “When I went to college, I was not very active in my faith. I attended mass because my mom always made me do it. I grew a great deal in my faith, and got involved in a lot of ministry and service, and I loved doing that. It became something I wanted to do as a career. At first, I became a youth minister, and that was a great way of fulfilling that, but at one point I just randomly met a group of Jesuits.

I had never heard of the Jesuits, or knew any information about them, and when I met them and saw their own community bonds, and heard that Jesuits do all sorts of different jobs all around the world, there was something about that just captivated me. I would say that from that moment, that first thought that maybe I would like to do this, never left my mind. About four years later, I became a Jesuit.”

Q: What are your plans for the future? After this year, what’s the next step?

A: “The very next step for me is I am going to move to New York and work at America Media, which is another Jesuit apostolic work that specifically deals with the media component of it. It’s a magazine that has been around for about a hundred years, and it essentially gives a Catholic and Jesuit perspective on the issues of faith, culture, and politics. My job will be working with their video department, trying to create videos for them, and for me, I actually asked the Jesuits to do that because I wanted to grow in my experience to use video as a way of helping people without a voice to be able to find it.

That’s my very next stage, and next I would continue along in my formation in which I would attend Theology school. In general, with the Jesuits, we don’t always know our future exactly, but we are always encouraged to express our desires. I know my desire is to continue audio/visual work to help other Jesuit institutions, or help people in general.”

Q: What did you do before coming to Jesuit?

A: “Directly before coming to Jesuit, I was in a stage of formation, where I was studying theology and philosophy. I was at St. Louis University, studying philosophy and theology, and this was a time my Jesuit superiors allowed me to pursue a master’s in Communications. I was sort of studying all three subjects at the same time, and that’s where I really got my feet wet in video production.”

Q: If you had to pick, where in the world would you want to serve and why?

A: “I think right now I would like to go throughout Central America, I think what I would love to do is combine work with those who are poor and vulnerable with the work I’ve been doing in video production.

What I would love to do is document the lives of people in other countries, especially those are who are trying to come into this country, just to give a chance for those people to tell their own stories because I feel like plenty of people make up those stories, or make up scenarios of what those people are going through.

I would love to show them, here is actually what these people are going through in these countries. I would love to be able to do something like this.” 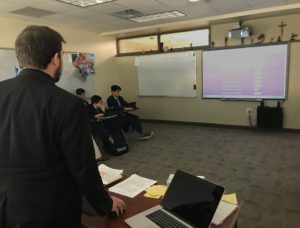 Q: I am a sophomore in high school, and there are these competing desires we struggle with; how we can do something to either help change the world or to be financially successful. What would be your advice to try and navigate through that storm of conflicting pulls?

A: “I think the first thing I would say is that for one, those goals don’t have to be conflicting. They are not polar opposites. Although the motivations can be from different places. I would hope that any of our students would really spend time, getting to know themselves, their deepest desires, and what really drives and motivates them. I would assume that for many people the drive for financial success has a deeper meaning behind it, because in the end, I don’t think that drive for financial success alone is the most motivating factor.

If you were to dig deeper, and find your true purpose, you would find a calling there. It may or may not have a financial aspect attached to it. But to find that purpose, because in that you will truly be a happy person, and be the person you were meant to be. I think in the process of doing that, and being that fully alive person, that’s the kind of person that changes the world. Those who are passionate, and fully alive in what they do, are the type of people that are capable of changing the world.”

Q: What do you think is the future of the Society of Jesuits, and the impact it holds for the future?

A: “At this moment, the Jesuits are getting smaller in number. There are people joining the Jesuits, so it’s not this idea that the Society of Jesus is going to die out. But I do think that we might need to re-evaluate how we continue proceeding, this might be a sad thought.  But next year, there will only be 2 Jesuits here.

It’s because right now, we are in this mentality of we have all these different places and fewer Jesuits, so we are spreading them out. I think the future of the Jesuits is more so looking forward to where we are supposed to be right now because that’s essentially how the Jesuits began.  It was a group of friends who saw needs in the places where there were at, and they were sent to go fulfill those needs. And I think lately, our goal will be more so maintaining places that we have been, and I think it might be time that we look forward to places that we need to go. I think we might see a smaller, very mobile group of Jesuits going from place to place fulfilling their needs.”

Q:  Hypothetically, if you were walking out the door from Jesuit, what is one piece of advice that you would give to administration, parents, or students?

I think we do a great job, but I think we can continue to dig deeper than on the surface of that. The advice I would give specifically to students is find what you are passionate about, and find specifically what motivates you at the end of the day. And I would hope that it goes beyond the idea of what you are supposed to be doing, maybe it comes from the influences of other people. But for you personally, I suggest that you continue to dig deep to figure out what really motivates you and to follow that with all your heart.”

Although Jesuit will greatly miss Mr. Redding and the contributions he has brought to Jesuit, everyone wishes him well for the next chapter of his formation. As my teacher in Mission and Church, his lectures and stories revolving around Jesuit history and his personal life have given me a perspective on how to integrate Ignatian Spirituality at Jesuit on a daily basis.

Stay tuned to The Roundup for more community profiles!