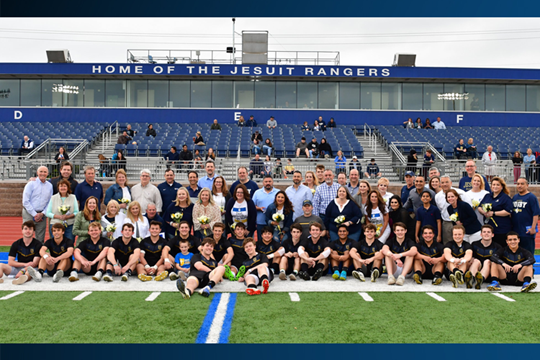 First, the Rangers faced off with the Quin Colts on Saturday, March 2nd in an exciting match that ended with a 38-12 win. Solid defense by Jesuit held the Colts scoreless in the second half, and tries by Evan Davis, Mitchell Campbell, Jacob Jowdy, Hector Juarez, and Noah Villasana boosted the Rangers to a solid win. Following the victory, the Rangers began preparing for the Rugby Showdown hosted at Jesuit the following weekend, a grueling weekend of rugby that would grant them insight into some of the teams they might be contending with later in their season. The Rangers kicked off their Showdown tournament strong at Postell Stadium on Saturday, March 9th with a resounding 71-0 win over the North Texas Barbarians. An offensive highlight reel of a game, the Rangers entered halftime with a 45-0 lead and continued to pour on the points until the final whistle. The Rangers then had to face the Allen Eagles later that same day for the second game of their tournament run and came out of Saturday with another win, this time a 45-12 victory over the Eagles.

Jesuit then had to face off against the St. Pius X Panthers of Houston for the final game of the Showdown on Sunday, March 10th. Both teams entered the match 2-0 in the tournament and were fierce competitors for the coveted Showdown Boot. While St. Pius fought valiantly, the Rangers dominated in all aspects of the match and brought home the Showdown Boot with a 33-12 victory. Tries from Noah Villasana, Jacob Jowdy, Matthew Mancillas, and Evan Davis elevated the Rangers to the victory. 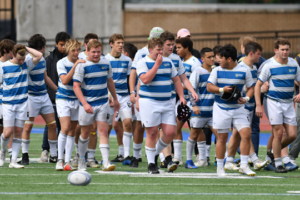 Following their promising performance in the tournament, the Rangers played the Plano Wildcats at Postell Stadium on Friday, March 29th. This marked Senior Night for Jesuit and all 20 Senior rugby players were honored with their parents prior to the game. Both teams struggled to gain the upper hand in the first half, with Plano taking an early lead going into the half, 14-5. However, Jesuit’s offense stepped up in the second half to make it a 54-14 scoreline, with Jowdy, Lane, Mancillas, Bowen, Triantos, and Woodard all scoring to give Jesuit another dominant win. Finally, Jesuit faced the Westlake Chaps from Austin in their last home game of the season on Saturday, April 6th. As both teams were contending for the Rugby Texas Division I North title as they headed into the playoffs, the intensity was high and both teams felt the pressure to win and take the 1st seed spot for the postseason. Despite the wet conditions, a stifling defense and tries by Woodard and Telfer gave Jesuit their last win of the regular season, with a score of 24-7. With this exciting victory, the Rangers continue into the offseason 1st in the North conference with a record of 12-1.

The Rangers will play Cy Fair next in the first round of the Rugby Texas Division I State Tournament as they look to take their third state title. Stay tuned to the Roundup for more Jesuit Rugby news!