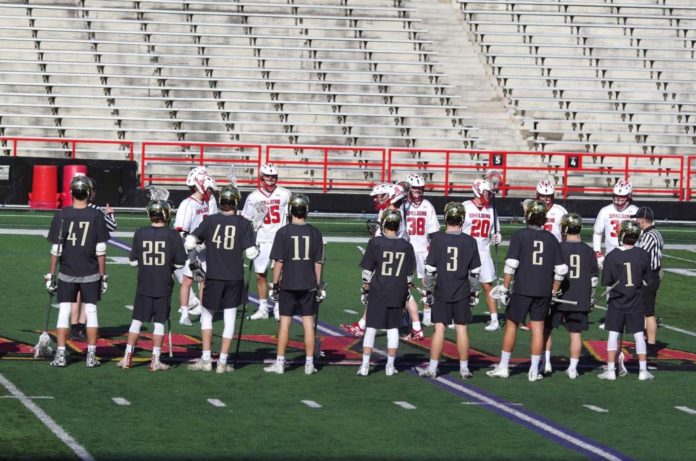 The Jesuit Lacrosse team traveled up north to play teams from around the D.C. area for the first half of their spring break. They played Archbishop Spaulding, Choate, and fellow Jesuit School Gonzaga, some of the top competition in the country.

The first game of the trip, Archbishop Spaulding, took place on Saturday, March 10th, at the University of Maryland. The team had the chance to attend a Maryland men’s lacrosse game against Albany earlier in the day on the same field they would take a couple hours later. In the first half of their own game, the team struggled to capitalize on offensive opportunities, entering the half down 3-1. Coming out of halftime, the Rangers attempted to rally back led by senior midfielders David Sprock ’18 and Grayson Hassell ’18, scoring four more goals in a great second half effort. Sadly they fell short and lost with a final score of 7-5.

Sophomore defensemen Drew Martin ’20 said “the MVP was Will Moran ’19, he’s a brick wall in between the pipes. The offense was moving the ball well we just need to capitalize on opportunities.”

The team’s second game featured a boarding school opponent, Choate, from way up North in Connecticut. Although just a scrimmage since their opponent was still in its preseason, the Rangers were ready to go out guns a blazing. Another game that featured a story of two halves, the first half ended with both teams sitting at 3 goals apiece. In the second half, the Ranger’s potent offense scored 7 more goals to distance the team from Choate, while the defense only gave up one more goal thanks to another stellar performance in a cage by Moran.

Junior attackmen Dylan Topolski ’19 thought “the offensive effort in the second was sparked by some of the older guys, but it was cool to see some of the less experienced guys have a chance to get some valuable in-game experience and make a difference in a real game situation.”

After a much needed day off that was spent practicing at Gonzaga, touring the school, visiting the Capital, and going on a team field trip to a local bowling alley; the Rangers were ready for their final game on Tuesday against the nationally ranked and fellow Jesuit high school Gonzaga. Unfortunately, the Rangers fell to Eagles with a final score of 10-2. The Eagles stifling defense proved too much for the Rangers to gain any traction on the offensive side of the ball, and the defensive struggles clearing the ball did not help their cause.

Will Moran ’19 stated that “While the loss wasn’t the way anyone wanted to end such a memorable trip, it helped us realize how much work we still have to do. Gonzaga capitalized on everyone one of mistakes and showed us while we’re not a weak team we have to continue to work hard”

The Ranger’s return to action March 20th as they look to bounce back with a win against Keller.