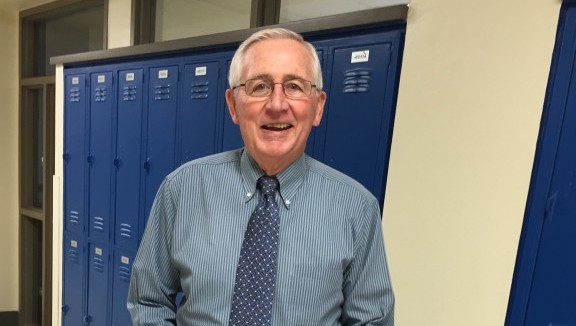 Many horrors in history, no matter how terrible, are often forgotten about in the flurry of progression in an ever-changing world. However, one of the most documented wars in history, World War II, has been remembered worldwide for over 70 years. The stories of the war are still being told by those that survived it, whether it be those that were victims of the holocaust or those that were simply there at the wrong place during the wrong time period. One of these survivors of the conflict Mr. Karl Oswald, an administrator at Jesuit, has lived to tell the tale, having written a memoir about his life which includes his memory of the war. Mr. Oswald was the guest speaker at last Thursday’s Social Justice Club Meeting.

Oswald stated, “It was my intent to demonstrate my life’s story as a victim of World War II and a Displaced Person which is somewhat similar to what is occurring in the world today. I was born in Eastern Europe, was forced to leave my home and country and travel hundreds of miles (some on foot) to arrive in what was known as the Western Zone of Germany. Today, many thousands of human beings are fleeing their country to seek freedom from war, avoid persecution and to escape inhuman living conditions.”

Bryan De La Cruz 16’ believes that it was “more personal to get an account from someone who lived through the circumstance rather than read it in a textbook or have it taught in a classroom.” So often we are forced to look in books and online resources in order to find out about the many tragedies that have plagued our planet in history, and the opportunity to learn about one in person makes the experience far more memorable and meaningful to all those that listen. The survivors of the war are becoming fewer and fewer with each year, and a first-hand account is rare so the opportunity truly was once in a lifetime.

Mr. Oswald wanted the students to take away “that war, any war is Hell. Believe in yourself and never give up. Continue to strive to gain the willpower and strength to achieve your goals.” His message resonated with everyone who listened as his story and carried the voices of so many who were lost too soon. Bryan found “it difficult to hear about the awful things the people did when they figured out they were German. In addition, it was also an eye-opening experience for me in terms of opinion. In other words, the takeaway from the talk is giving one the opportunity to receive a full picture of WWII rather than a romanticized view given here in the states or taught in the classrooms.”

Bryan and the Social Justice Club hope ”to bring in more guest speakers, to either bring light to a particular subject or simply give a more personalized account of the topic rather than a brief article or short clip on the subject. Moreover, to be able to hear someone’s life story, formulate an opinion, and act out Justice based on this opinion.”

The Social Justice Club was formulated for this purpose, to talk about issues and possible plans of action to help solve the problem. Mr. Oswald believes that a plan of action is to aid those who are refugees now, seeing as how it has become an international problem and since he was once one himself. “In 1952, my entire family was given the opportunity to immigrate to the United States. I shall never forget the feeling that came over me as our ship passed by the Statue of Liberty. Although this is the greatest country in the world, I will never forget my homeland.”

The Jesuit Social Justice Club’s focus allows us to be able to look at these injustices through history and see the places that they are still present in our world today. The refugee problem is far from solved, in fact, it has just become one of the biggest problems in the world. If Mr. Oswald can look back over 70 years and recall a world problem then look around today and see that it is still there, then one must question the call for social justice of all who have stood witness. If anything, this is a call to action to at least recognize the current problem with the perspective given by Mr. Oswald’s moving story.