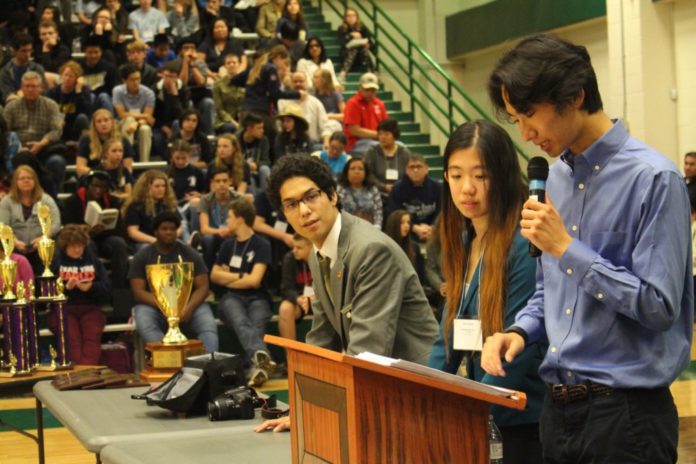 “All in favor say ‘Aye!’” screams TSJCL President Hunter. “Ayyeee!” roars the crowd. “All opposed say ‘nay!’” says the President. “Nayyyyy!” answers the same crowd. “Meeting… Adjourned.” As hundreds of Texas students rush out of the gym, it is safe to say the annual JCL state competition had begun.

This two-day event included competitions that range in difficulty from Latin ½B all the way to Veteran Latin. These competitions encompassed a wide variety of topics such as academics, arts, and Ludi (a variety of sports games, the word translates to “game”). As chaperone and sponsor of the Jesuit JCL Club, Vanessa “Magistra” Jones stated, ”There’s something to do for everybody; you can compete in multitudes of academic categories, you can play Ludi sports, you can play Certamen (imagine Jeopardy except for Latin, translates to “contest”), or can even go to a dance. There’s something for everyone here.”

On April 13, 2018, a group of about roughly forty Jesuit students huddled into a school bus just after the 7th period bell, ready for their shot at winning one of the many categories at the competition.

Naaman Forest High School in Garland, Texas. These students ranged from Veteran Level Latin learners like Jaylon Briscoe ’18 and Noah Johnson ‘18 to first year newbie Freshman Carl Wilson ’21 and Adam McCutcheon ’21. Some of the stars of this meet included Carl Quist ’19, the current second Vice President, and Cameron Crowley ’19, a contestant for both the vocal Solos competition and the Talent Show.

Across the two days of competitions, the Jesuit JCL Club won roughly 60 ribbons and trophies in all. Some of the repeat winners included Noah Johnson ’18, Jared Petrol ‘18, Jaylon Briscoe ’18, John Zevallos ’18, Gabe Farrell ’19, Carl Quist ’19, Cameron “Cam” Crowley ’19, and Will Kelton ’20. The first place winners were Jaylon Briscoe ’18, Noah Johnson ’18, Jared Petroll ’18, Gabe Farrell ’19, and Carl Quist ’19. A special highlight from competitions was Carl Quist winning a trophy for a perfect score in Dramatic Interpretation, where one recites an approved passage with emotion. This was quite the haul for the Jesuit JCL Club.

One of the highlights of the meet was the election for state officers and representatives. Among the candidates for the spot of President, Jesuit student Carl Quist was nominated by the Nomination Committee as a runner. Carl previously had experience throughout the Texas Delegation officer community, as he is currently the second Vice President for Texas JCL. After a beautiful campaign speech, it was clear his plans were to implant “a series of reforms designed to reinvigorate TSJCL participation and spirit.” Carl has a true passion for JCL. Over the course of this year until his graduation as a senior, he plans to “work with all the officers on my board to improve as much as can be done with their particular responsibilities…and speak with non-officer TSJCL members to determine what people think needs to be improved at the convention, and work to develop a program that most benefits the delegates.

Another highlight was Cameron Crowley’s performance at the talent show, who amazed the judges and closed out the final appearance with his unreleased song.

Here’s a little clip from Cam Crowley’s finale performance @tsjcl Check him out on YouTube and Spotify. pic.twitter.com/OqYQZ8GosU

The Jesuit College Preparatory School of Dallas delegates were sponsored by Lisa “Magistra” Druebert and Vanessa “Magistra” Jones. Ms. Druebert states “I would like to hand it off all to Ms. Jones, she completely transformed [this year’s club] into one of the biggest extracurricular activities in Jesuit.”

Jesuit’s JCL Club defied all expectations, winning or placing highly in many of the various competitions. Even though some of the Jesuit JCL Club’s most prestigious members are departing next year for college, many successful underclassmen seem ready for the task of leading the club next year to even more victories in competition.