More
JesuitRoundup.org is brought to you by:
The Ashmore Family
News Archives The History of Jesuit Football, Part I
Facebook
Twitter
Email
Print 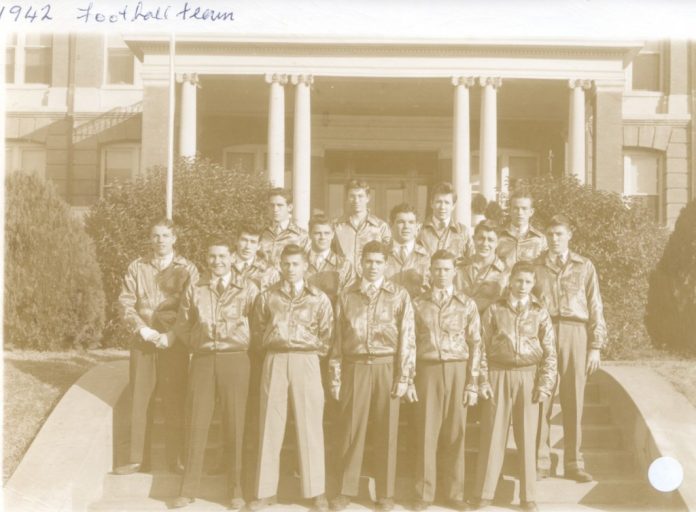 The game of football has thrilled fans since the first game was played on November 6th in 1869. The game evolved and soon incorporated ideas such as the snap and even later the forward pass.

In Texas, football holds a special place in everybody’s hearts, and whether it’s pee-wee, high-school, collegiate, or pro level, crowds seem to flock to the field. The game has always been a part of our state and even more so a part of Jesuit. It just wouldn’t seem right to not have a football game on a Friday night in the fall.

Fans love the thrill of a close game in the cool, crisp Texas fall night, watching their beloved Rangers battle for every inch and yard on the gridiron. The program here at Jesuit has come a long way from the small team once formed in the early forties to a strong powerhouse in Texas’ 5A division football which many deem one of the best within the nation.

Jesuit’s first team was formed in 1942 and was led by Coach Eddie Maher to an eventual 6-2 season. The game has developed from what it once was and can easily be seen through the equipment worn by the players, such as the iconic leather helmet and bulky shoulder pads.

It’s in this first team that Jesuit High develops, that the first stars begin to emerge. Gene McClintock, the Ranger’s halfback, finished his 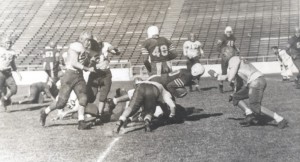 season with 12 touchdowns combining for a total 72 points, crucial points which allowed the Rangers to scrape out wins against St. Edwards, Birdville, Maybank, and several others.

Another key player at the time, Toadie McClintock, the quarterback, aided in several tough situations and provided the squad with a strong foundation due to his renowned leadership qualities and charisma. Both Toadie and Gene were key players which allowed for the underdog team–which Jesuit was at the time–to earn respect for the quality of its players, rather than its quantity.

Although small and underestimated, Jesuit High lost only two games during the season. Two close games, eventually lost in the final few minutes of the fourth quarter. Kaufman, the opening game, was lost, initially setting the stage for what appeared to be a rough season due to the 0-13 loss. 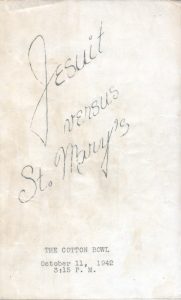 The Rangers bounced back winning four consecutive victories before falling for the last time to Saint Mary’s. Saint Mary’s managed to chalk up 15 first downs, while the Rangers mustered up a mere 7, which made scoring opportunities rather scarce.

Eventually, St. Mary’s found a breaking point in the Ranger defense which allowed for a touchdown in the 3rd quarter. The defense managed to fight back and prevent the extra point, but was defeated, yet again, in the 4th quarter letting in both a touchdown and the PAT.

The Rangers managed to set a strong foundation for later Jesuit football players and were the first football players to receive letterman jackets. The design has come a long way since the early 1940’s and still stands as a symbol of pride among the few elite who earn and wear them.

The program provided a strong base upon which to build a football team which in later years would prove to be one of the best within the Dallas metroplex. The first team which Jesuit formed happened to impact the school for years and thanks to their hard work, dedication, and perseverance, every fall night, people can come out and cheer on their Rangers to victory. 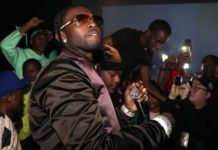 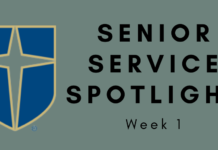