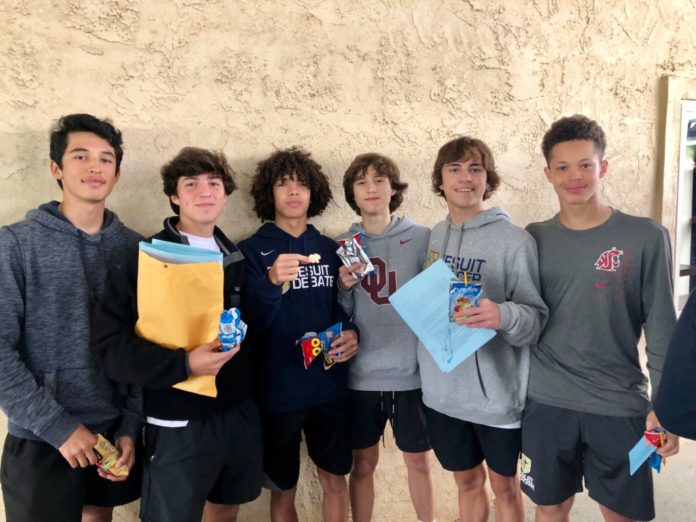 300 students, 6 buses, 1 camp, what could go wrong… Not much really, except a wonderful and insightful retreat.

On April 3, 2019, the Class of 2021 embarked to Camp Copass for the annual Sophomore retreat, where they spent the day reflecting on their relationships with others through the lens of Ignatian spirituality. 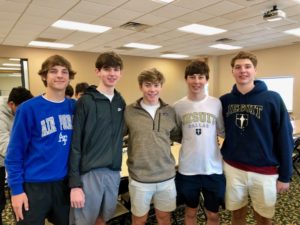 The Sophomores began to arrive at Jesuit at around 7:30 am. Grabbing a quick bite, they promptly began to load the buses at 7:45. Jesuit rented six Roadrunner buses, each with approximately fifty seats. Alvaro Luque ’21 was amazed at the quality, stating, “Bro, this is nicer than my car.” Once all of the Sophomores were loaded on the buses, they got on the road to Camp Copass.

After forty-five minutes, the Sophomores arrived at Camp Copass. Unloading, they all gathered in the main Worship Center. Coach Williams gave an introduction for the day, and the sophomores started. The first thing that they did was split up into groups. Thirty-four Sophomores had volunteered as group leaders and received a four-hour training course in order to prepare to each lead approximately 8-10 Sophomores, including themselves.

“As a group leader, I really admire how the members of my group were able to express themselves and we all grew closer. It really showed me what brotherhood is all about,” told Graham Bowers ’21. After splitting up, the students sat down with their groups and got ready for the start of the retreat. 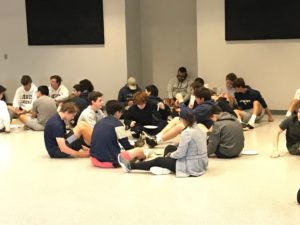 The retreat was planned out as such: four activities, lunch, free time, and the last four activities. Each activity was structured beginning with a reading about the life of St. Ignatius that introduced the theme of that activity. Next was a “put into context” talk, usually done by a faculty member or group leader, that related the topic with everyday life. Next was group time, where each of the groups sat together, conversed, and answered pre-designated questions about the topic. Finally was a reflection, where everyone came back together, and Sophomores were encouraged to write a reflection or answer some questions in their journals. 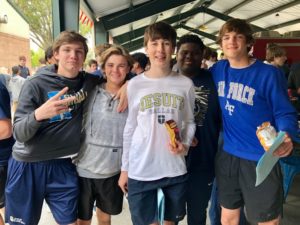 As most activities begin when there is a group of people that may not know each other very well, the Sophomores began with a sort of icebreaker activity, called the Wagon Wheel. Each group sat down in two circles, one on the inside and one on the outside. While in this formation, they introduced themselves and talked of various fun facts. After every question, the outside circle would spin one person over so the students could talk with multiple other boys. 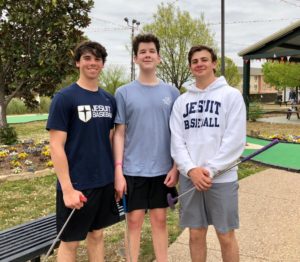 Next was the Mask activity. The Sophomores reflected on how they viewed themselves, and how others viewed. They each received a paper plate and drew these views on either side, one side for how they viewed themselves, and the other for how others viewed them. Then they participated in the Screenshot activity where they answered questions and reflected how they are seen through the internet and social media. After one more activity, it was finally time for lunch. 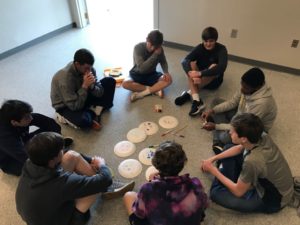 The Sophomores headed over to the cafeteria. Their lunch was pot roast, a roll, carrots, mashed potatoes, gravy, salad, and banana pudding. To drink there was pink lemonade, two kinds of fruit punches, and water. After eating the delicious lunch, the Sophomores received almost an hour of free time. Camp Copass had multiple sites for recreation including a soccer field, basketball courts, gaga ball pits, and a human foosball set. The gaga ball pits gained popularity quickly as a game that was meant for approximately 16 people at the most, suddenly had about 50+ people. When the hour was over, air horns sounded and the Sophomores congregated back in the main worship center. 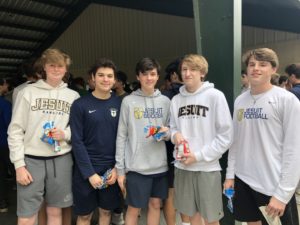 They resumed their activities beginning with the Stand-Up activity, which was by far the most well-liked of the eight. In this activity, the Sophomores rearranged all the chairs so each half would be facing each other. Then, Mr. Yohannes said important and somewhat personal statements such as, “Stand up if you were born outside of the US”, “Stand up if someone you know has a drug or alcohol addiction”, “Stand up if you have only had A’s in your report card”. The Sophomores would rise if they met the statement, and so the class as a whole grew closer together realizing their similarities and differences.

Andrew Sherman ’21 commented, “I liked the Stand Up activity because it wasn’t just a lecture, it was active. You felt comfortable and knew you wouldn’t be judged.” Upon finishing that activity, came the last three activities which required the Sophomores to reflect on topics such as the profile of the graduate, their relationships with their friends and their parents. At around 3:50, there was a final prayer and the Sophomores loaded back onto the buses at 4:00.

The Sophomores arrived back at Jesuit at around 4:45 and gathered in Hughes Hall where Mr. Ornelas and Mr. Williams recapped the day and got them ready for mass. Between 5:00-5:30, the Sophomores headed over to the Terry Center for 5:30 mass. Between the main school building and the Terry Center, all of the group leaders lined up and presented each member of their group a small gift. This gift was a key, that had the Jesuit crest on one side, and “The Company” on the other (“The Company” refers to the Compañía de Jesús which was the original group of Jesuits). This was a family mass so many parents also attended. Fr. Postell gave the mass and his homily focused on the Sophomores’ models. People in their daily lives that guided them and showed what to aspire to be. Upon finishing the mass, Dr. Knize gave a final talk and thanked all the wonderful people that made the retreat possible especially the two sophomore counselors, David Williams, and Raul Ornelas. 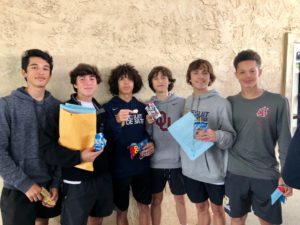