Hoping to mix the lab back into the classroom, Jesuit science teachers, along with other Jesuit staff, planned and overhauled three new science labs in the upstairs B Hallway over the past year. The idea for the new labs has been floating around for the past few years. Science Teachers Dr. Todd Gruninger and Mrs. Julie Carver took the lead on the project, working with Rick Atkinson, Jesuit Construction Manager. Dr. Gruninger calls the labs, “the culmination of a lot of people’s ideas.”

For the past year, the new lab committee held weekly meetings with Assistant Principal Ben Kirby and other school administrators trying to plan the labs. Once the planning stage was complete, they were ready to move on to construction. Over the summer, the labs were created in-house, meaning that Jesuit’s own staff did the building rather than hiring it out. Headed by Director of Maintenance Mr. Kevin Vardell, the Jesuit Maintenance Staff, interns, and work grant students were able to complete the project over the summer. As a result of their hard work, Jesuit was able to save tremendous amounts of money. Mr. David Berend, Head of Jesuit Finance was key to the project, running all the costs for the project, which were paid from school reserves.  He found that if Jesuit had contracted the project with an outside contractor and purchased the science furniture, it could have cost $200k. However, by using the Jesuit’s Maintenance staff, Jesuit was able to finish the project for $82,465, a huge savings.

The goal of the project was to merge the science classroom with the lab, rather than having two separate settings. Before, Dr. Gruninger said he “hated teaching science in [the old classrooms].” He would often be teaching and think, “oh, we could do a quick-cool lab.” However, the lab took so much time to set up that the period would end. Of the new labs, Dr. Gruninger says he “loves it,” and whereas last year he would have done one lab at this point in the year, he has already done three.

Aside from merging the classroom and the lab, another goal was to create a true modern science lab in hopes that it would mirror what students see when they go to college. Dr.  Gruninger wants to “better prepare graduates for science labs” in college.

In addition to Dr. Gruninger, other science teachers have responded with great feedback on the labs. Chemistry Teacher Ms. Stefanie Page has said that her favorite aspect of the new labs is that

she “can teach a little bit, and then go straight to a lab setting and do demos.” She also likes the new height of the lab tables, which were increased so that students could stand at the labs because it’s “proper protocol and procedure.”

In addition to the new labs, new equipment has been added including sensor probes that connect directly to the iPad along with a new hood vent in the preparation room. There are also two new centrifuges and many other tools for working on the molecular level. Dr. Gruninger believes that “life science labs are going molecular,“ and this new equipment will be “key” to preparing students for their college biology classes.

Although the rooms are brand new, the teachers already have ideas for improving the labs even further. Ms. Page says that visibility is an issue: “you sometimes see [students] standing because they can’t see the Smart Board.” Chemistry teacher Ms. Allison Savoy says that white board space is sometimes an issue because there isn’t much space to have a white board in her new classroom. But looking on the bright side, with “Air Server,” a program that shows the iPad screen on the Smart Board “that kinda replaces the issue of the white board with technology.”

The plan for the future is to receive more feedback on the strengths and weaknesses of the new labs, and then renovate the other labs to the same standard of the new labs. 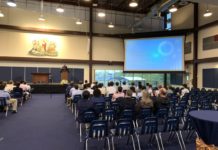 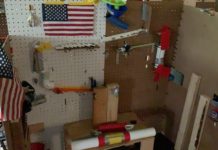 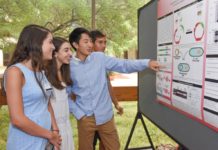 Life in the Lab