More
JesuitRoundup.org is brought to you by:
The Ashmore Family
News Academics Class of 2019 Celebrates at Senior Convocation
Facebook
Twitter
Email
Print 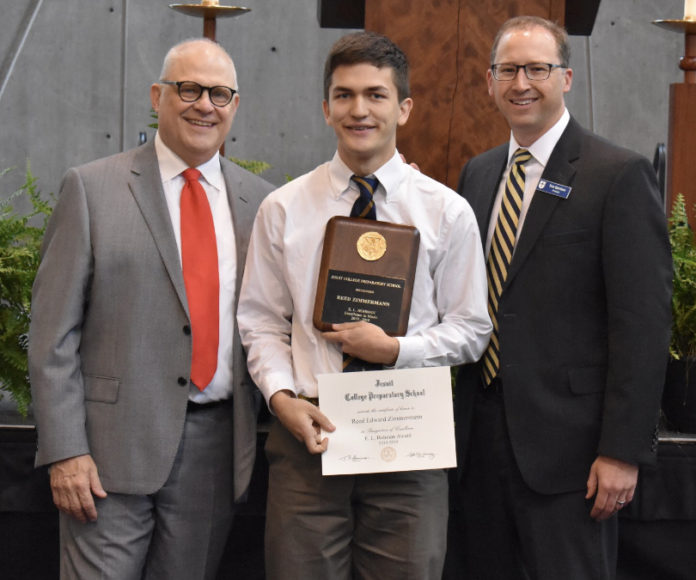 The senior class celebrates four years of brotherhood, service, and friendship at their graduation this weekend. But this celebration doesn’t begin this weekend; it began two weeks ago with the senior convocation.

The Senior Convocation annually celebrates the achievement of the senior class. The Jesuit student body joined the parents of seniors for the 2019 convocation, held in the Terry Center on May 10, 2019 at 9:00 am. The convocation was organized by military appointments and academic and extracurricular awards. If you missed the Senior convocation, you can view the event’s live stream here. 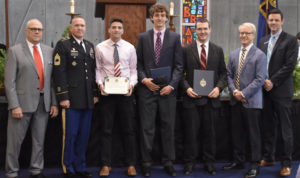 Mr. Tom Eschenbrenner, the United States Naval Academy Blue and Gold Officer, and Master Sergeant Jeremy Hubacek, Senior ROTC Military Instructor at the University of Texas at Arlington joined Mr. Earsing and Dr. Kirby at the front of the stage to recognize the seniors receiving nominations and acceptance into service academies or ROTC scholarships.

Each year, The United States Naval Academy seeks well-rounded candidates who have done well academically and athletically and have demonstrated strong character and leadership potential.

Approximately 16,000 students compete annually for one of 1,200 slots at the U.S. Naval Academy.  Appointment to the Naval Academy is equivalent to a full 4-year scholarship valued at $400,000 with tuition, books, medical benefits, and monthly salary included.  With 25 majors to offer, graduates of the Academy receive a Bachelor of Science degree, commissioning as Ensign in the Navy or 2nd Lieutenant in the Marine Corps, and will join others in serving our country in many ways, including surface warfare, submarines, Marine Corps Ground and Air, Navy pilots, flight officers, or Navy SEALS.  Robby Freimuth and David Reichert have been accepted to the Academy. 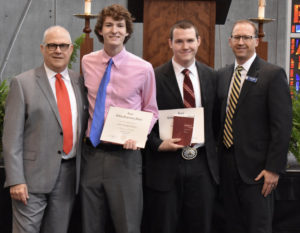 In addition to these military appointments, Ethan Maymir received a full-tuition National Army ROTC scholarship to The University of Cincinnati.

Garrison concluded, “We all owe these young men our congratulations and sincerest gratitude for committing themselves to the service and security of our nation. Please join me in congratulating them on these prestigious awards and their decision to serve.”

Mr. McDaniel, the junior counselor, took the stage to announce the recipients of academic department awards, each of whom received a certificate of excellence. 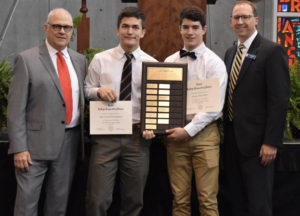 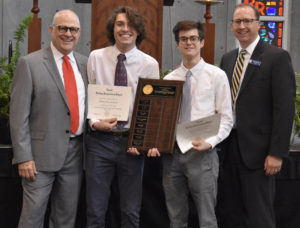 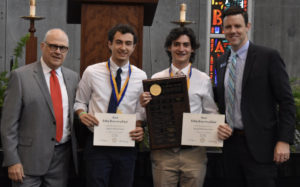 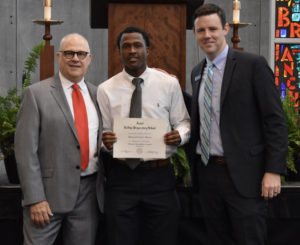 Jesuit joins hundreds of other schools across Texas and the entire country each year in participating in two math competitions.  They are known as the TXML (the Texas Mathematical League) and the AMC 12 (the Mathematical Association of America).  Jesuit recognizes the highest scoring students from each of these competitions. The highest scoring senior for the TXML and AMC 12 is Mathios Mekbeb-Gillett. 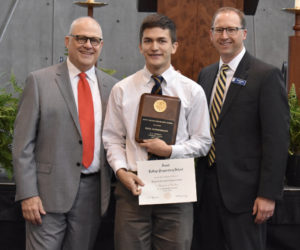 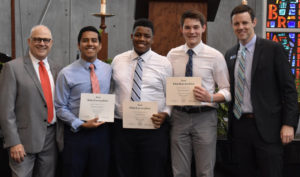 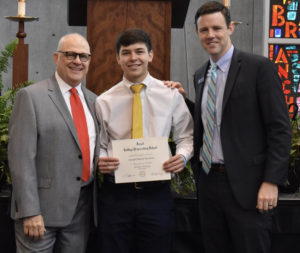 The Lone Rangers is a spirit organization whose members support their Jesuit brothers at various events throughout the year.  It is tradition at Jesuit to have the names of senior Lone Rangers embroidered onto the letter flag which they carried throughout their senior year. Certificates were presented to: 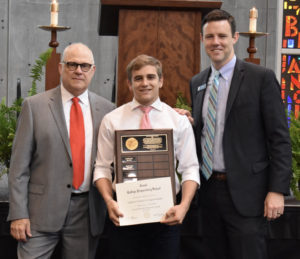 The office of Campus Ministry fosters religious growth in light of Catholic tradition and the vision of St. Ignatius of Loyola by supporting all members of the Jesuit Dallas community in their call to proclaim the faith, promote justice, and grow in their personal relationship with Jesus Christ. When St. Ignatius sent his men of the society forth to carry on the mission of Christ, he told them to “set the world on fire!”  Campus Ministry would like to recognize the following seniors for their dedication to ministry during their time at Jesuit, hoping they too set the world on fire.  The Hearts on Fire award is presented to Grant Delanoy and David Reichert.

Jesuit honors the Editors-in-Chief of The Last Roundup.  This student has dedicated years of service and immeasurable contributions in planning, designing, and creating the yearbook.  He also encouraged excellence from fellow staff members.

For dedication to The Last Roundup, the Editors-in-Chief Award is presented to Matthew R. Cox and William Roberts

The Student Council Award is presented to Buck Popolo 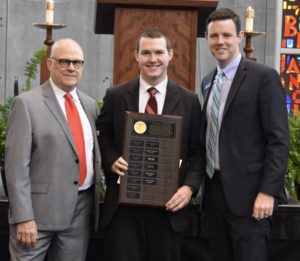 The Senior Magis awards are given to seniors who, in daily ways, give the magis, “the more,” to their community.  These students, in studies, in relationships, and in support of Jesuit, have gone beyond the ordinary.

This year’s Senior Magis Awards are presented to:

The Thomas Wunderlick Award is given in honor of Tom Wunderlick, a 1946 graduate of Jesuit Dallas.  Mr. Wunderlick was the first president of the Jesuit Alumni Association.  He had four sons graduate from Jesuit, as well as 10 grandsons who have attended our school.  The Wunderlick award is presented each year to the graduate who has best combined athletic and academic achievement during his years at Jesuit. The Wunderlick Award winner will receive a Certificate today and a trophy at the graduation commencement. This year, The Thomas Wunderlick award is presented to Max Abmas.

The Ad Astra Award recognizes leadership in creating new initiatives in community service and the development of new programs to serve the Greater Dallas community.  Ad Astra is a Latin phrase meaning “to the stars.”  The following students have gone above and beyond in their efforts to serve the Community Service and Social Justice program.   The Ad Astra Award is merited by Reagan Ernst and Greg Yared.

‘Man for Others’ Award

The Profile of the Jesuit Graduate states, “at graduation, the Jesuit student, well on the way to establishing his own identity, has also begun to move beyond self-interest and self-centeredness in human relationships.”  The Jesuit ‘Man for Others’ Award, voted upon by the faculty, is given each year to students who exemplify, in their words and actions, what it means to be a Jesuit student who has moved beyond himself.  This year we honor three seniors who have demonstrated in their dealings with others, the ability to give of themselves selflessly.  The Man for Others Award winners will receive a Certificate today and a plaque at the graduation commencement.  The seniors meriting recognition as recipients of the ‘Man for Others’ Awards are:

Each year, the Jesuit Schools Network announces the recipient of an award to be presented in each of the 52 Jesuit high schools throughout the United States.  In the words of the JSN, “this award is to be presented to the member of the graduating class who, as a man for others, models the ideal profile of a graduate of Jesuit education:  a well-rounded person who is intellectually competent, open to growth, religious, loving and committed to doing justice in generous service to the people of God.”  The JSN Award winner will receive a Certificate today and a plaque at the graduation commencement.  He will also be the senior student speaker at this year’s graduation breakfast on May 19th.  This year the 2019 Jesuit Schools Network Award is presented to Gabe Farrell. 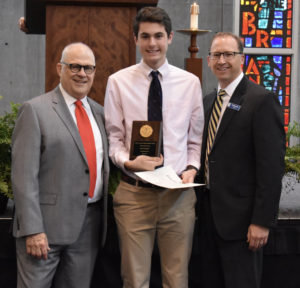 Jesuit’s highest award for outstanding achievement is named after His Excellency, the late Joseph Patrick Lynch, Bishop of Dallas, who invited the Jesuits to open a high school in Dallas in 1942.  It is awarded to the graduating senior, judged by the faculty to be most representative of Jesuit College Preparatory School, and most responsive to the influence of the school.  This award is in recognition of scholastic achievement, combined with character, leadership, participation in extracurricular activities, and service on behalf of the school and the wider community. The Bishop Lynch Award winner will receive a Certificate today and a trophy at the graduation commencement where he will give the keynote address. This year, Jesuit’s Bishop Lynch Award for outstanding achievement is awarded to David Reichert.

Stay tuned to The Roundup for recaps on the Junior and Underclassmen convocations!