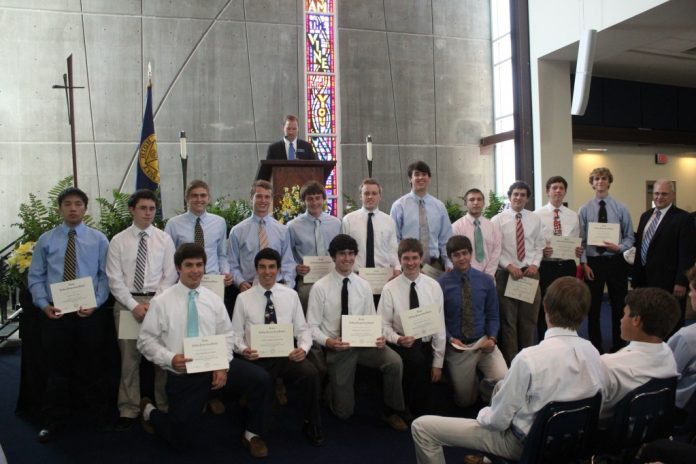 The Jesuit community gathers three times every May for the annual class convocations. Often referred to as the “hardest” and “most important” part of high school, junior year culminates in the largest and most extensive convocation ceremony, with more awards, scholarships and recognition than both the freshman/sophomore and senior convocation.  The junior convocation comprises a wide variety of awards based on academics, leadership and service to the community. 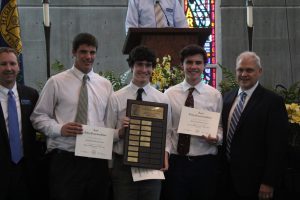 The award ceremony began Tuesday afternoon in the Terry Center after a call to prayer and scripture reading by Mr. Garrison.

Just like every other convocation, the junior ceremony started by commending the most exceptional students in every subject and nearly all extracurricular activities- with Ben Carver ’13, Austin Benavides ’13 and Cameron Kerl ’13 among the top award-winners.

After all these honors were bestowed, the event proceeded to the numerous book awards given by colleges from all over the country- a distinguishing feature of the junior convocation.  This year, 20 book awards were given, from lesser-known institutions like Wells and Hendrix, to the renowned ones such as Harvard and Yale.

Following the book awards were the scholarships which were, without saying, the most exciting part of the afternoon,

especially because they collectively totaled to just over $60,000. Among some of the bigger scholarships to be given was this year’s McWhorter award, which comes with a $7,000 tuition grant.  This award is given to the student who always put forth his best effort in athletics and academics, while also caring for the less-fortunate.  This year’s recipient, baseball player Ryan Pigeon ’13, expressed his sincere gratitude, remarking that even “to be mentioned in the same group as previous recipients is a true privilege.”  Pigeon also reflected on how the award carried a special meaning because his brother was also a McWhorter award-winner.

The Andrew W. Bark Memorial Scholarship is a scholarship given in honor of Andrew Bark, class of ’98, who died of cancer in 2002.  Bark always had a tremendous passion for art and put forth so much time and effort into his artistic interests.  Accordingly, the scholarship is given to a student who is talented in the arts and who puts forth great effort into perfecting their artistic talents.  This year’s recipient of the $9,100 scholarship was Joe Payne ’13.  Payne marveled, “I never imagined winning anything like this and I am definitely going to take it to heart and pursue the arts further.”

The most valuable scholarship given in the entire convocation is the Henrion scholarship.  In addition to covering the student’s entire tuition, the scholarship includes a stipend for other school-related expenses.  The honor is given in memory of the late Tim Henrion, class of ’87, who was killed in a car accident the day before his senior year at Jesuit. The scholarship is given to a student who is involved in the work grant program and who accepts his full responsibilities as a part of it; it is intended to unburden the recipient so that he can become more thoroughly involved in extracurriculars during his senior year.  Hector Maldonado ’13, this year’s recipient,  simply stated, “I’m incredibly thankful for the magnificent honor and opportunity that the Henrion family has granted me. I’ll never forget them.” 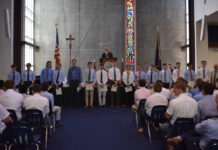 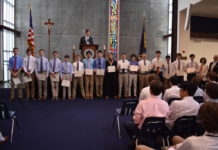 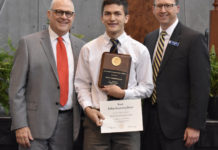