More
JesuitRoundup.org is brought to you by:
The Ashmore Family
News Campus Life A Year of WHAP Blogs
Facebook
Twitter
Email
Print 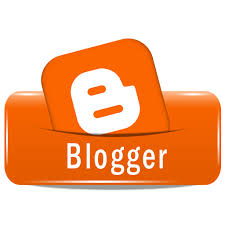 The bell rings, and another one of Mr. Profitt’s World History AP (WHAP) classes begins. Some students take out their notebooks, apathetically scribbling down words and broad ideas. However, some students in the back corner seem to be paying more attention than others. Taking detailed notes, the students furiously scribble in their journal, taking note of all Mr. Profitt says. The reason they do this isn’t solely for scholarly reasons, although that’s a part of it. The real reason they’re paying so much attention is that they have a blog to write tonight, and need to make sure they have enough content for their entry.

In sophomore AP World History, there are multiple categories of assignments, such as the usual ones like quizzes and homework.  However, unlike most classes, WHAP has a section for optional points (O-Points). By doing various activities to enhance one’s knowledge of World History out of class, students have the ability to add points to their grade through completing O-Point projects, maxing out at 3 points added to their semester grade.

One of these activities is a daily blog, where the student reflects on what the class learned  on that day, summarizes the lesson, and oftentimes relates current events to historical events. The blog is a common choice among students partaking in O-Points due the massive amounts of points it can reward, as well as the relatively small 20 minute daily commitment. It justifies this massive O-Point payoff because it essentially forces the students to go over the lesson material again every day utilize their knowledge. 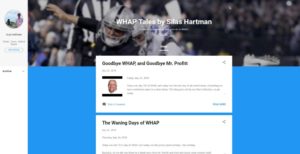 Silas Hartman ’20, from WHAP Tales, was one of the few sophomores to undertake the daily blog this year. Silas said, in reference to the benefits of the blog, “I think the blog helped reinforce many of the ideas that I learned in class, because it gave me an opportunity to go back over my notes and see what we learned, while making me think about the class in that it made me evaluate how the day went, which was helpful both for me and Mr. Profitt.”

Hartman continued on by saying “The blog did help me learn and understand a lot of the material better because it made me think about what we did during class, then write it all down again.”

Contrasting this, however, Hartman mentioned how “I’m not sure if it helped me learn various essay types, but it definitely was nice because I could always look back on it to review what I learned throughout the day.” 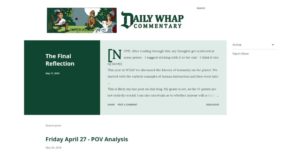 Garrett Nagorzanski ’20, from Daily WHAP Commentary was another sophomore who blogged about his WHAP experience this year. Garrett said “I think the most significant benefit of the daily blog in terms of academic performance was that it allowed me to formulate the knowledge we learned each day in ways that made sense to me, which helped solidify the material that we were learning as well as flush out some of the nuances and details behind the concepts.”

Continuing on, Nagorzanski mentioned that “The blog helped solidify much of the material we went over… and the process of re-transcribing notes from the class allowed me to make some broader connections.”

“Sometimes,” Garrett admitted, “this involved seemingly irrelevant political and/or philosophical ramblings, but a lot of times this process was genuinely useful in establishing larger trends and or ideologies over the history.”

Then, as he thought back on the blog experience, Garrett said “I don’t think I could honestly look you in the eye and affirm that I would do the blog with no O-Point reward…[even though] in theory, I think that one should do the blog anyway because it definitely helps in learning key concepts and studying for exams. I just don’t think that I personally would be motivated, which is probably on me. It’s a time commitment, although that could just be a result of the frequent tangents.” 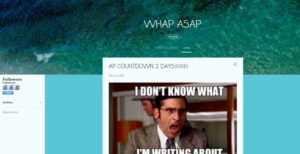 Trey Ashmore ’20, of WHAP ASAP, was one of two bloggers in Mr. Yohannes’ WHAP class this year. Trey tended to take a different approach on the blog then some of the other bloggers, detailing the events of the class more than the content learned during the class. As Trey described it, “I wrote the blog as if I were talking to one of my friends about what they missed in class and because of this I naturally tended to stray away from every single piece of content we covered in class and gravitate toward the more interesting highlights.”

Continuing, Ashmore mentioned how “The informal and satirical nature of my blog reflected the class’ natural tendency to “roast” one another at every open opportunity. I utilized and developed class personalities (such as Stephen Staples as fake news) to make WHAP more interesting.”

Trey, reflecting on his brief blogging career, said “I also don’t think my blog would have been the same without Mr. Yo’s method of teaching as he permitted us to have fun in class so long as we learned the material, and as a result, much of the class succeeded.”

Ashmore said that “While most of the content of my daily blog posts wasn’t focused on the content, I provided a page on the WHAP ASAP’s home screen for study resources, linking all of my Strayer notes over the 23 chapters we studied as well as Study Guides and Outlines provided by Mr. Profitt.”

Mr. Profitt, one of the two AP World History teachers, also had some thoughts on the daily blog. Mr. Profitt felt that students would profit off of doing the blog because “Nothing is more important for learning then reflection, and the blogs provide a way for students to reflect on what they are learning each day in class.”

Continuing on, Profitt said “[The daily blog] creates a habit that can serve student well throughout his or her life, with the benefits of daily learning and reflection transcending school and AP World History.”

Out of all the O-Point activities, Mr. Profitt considers the daily blog one of the most useful, but if it’s so helpful then why not make it mandatory for all students? Mr. Profitt said “The minute I make this a mandatory assignment, it would lose a lot if its authenticity, while becoming exceedingly cumbersome to grade.”

Mr. Profitt continued talking about the blogs, by addressing the specific types of blogs in the class. Mr. Profit said how “The best blog (in his opinion) is one where a student reflects on what he learned in the lesson, what he sees connecting to life, and current events.” Mr. Profitt also found that blogs where students summarize the key ideas and content from the day’s lesson, while summaries of what the class did didn’t seem to be as effective.

Mr. Profitt, then reflecting on the blogs of this year, mentioned “what is new this year is the number of blogs that seems to be more, for lack of a better word, emotive, which had a number of entries that seemed to be about making jokes or providing humorous “commentary.”

“Censorship,” Mr. Profitt considered, “would mess with the authenticity and honesty that I value about the blogs, but on the other hand, the time put into making a meme or cracking a joke might be better spent focusing on the history.”

I wrote a blog myself this year, @WHAP Jack, and while I don’t really have anything to say that hasn’t been said already, I’d highly recommend undertaking the blog project for rising sophomores next year. It really did help me to better understand the material, but also was fun and engaging to write every day.

Check back to the Roundup for more academic news, and check out some of the WHAP blogs down below for more information on the course and the O-Point project!

I Need O-Points By JJ Tellez

WHAP with Yo By Reid Staples