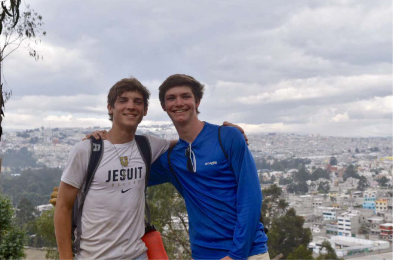 During this month of February, four different teams of two juniors have begun their campaigns and started to share their ideas with their student body. These pairs have been preparing for the upcoming preliminary elections on March 5th. Of these eight candidates, this article will focus on Zachary Freeman and Shane Hatzmann.

Background on Zachary and Shane

Zachary and Shane have been good friends since freshman year when they met on the baseball team, and they have grown closer ever since. Shane has been on the varsity basketball team for the last two years, filling a key role this year after missing last year with an injury. Then, Zachary is an outfielder and a third baseman on a very talented Jesuit baseball team. They both take challenging classes and are leaders of clubs like ambassadors, PALS, and 24/7.

How was your transition to Jesuit been?

Shane: “My transition to Jesuit was a bit different than some others because I went to our neighbor, DPL School St. Rita. So I had a group of buddies who I was already familiar with. And so I was able to kind of categorize myself with them at the start. So for that, I was fortunate enough to be part of that group. But then obviously as time went on, I expanded my horizons and put myself into different groups to meet different people based on what sports I played or my classes or what groups or other activities I wanted to surround myself with.”

Zachary: “So for me, I’ll say it’s different. I went to a public school. So I didn’t know anybody coming in here. No one knew my brother. And he didn’t really find his group at the beginning as well. So I don’t know any of his friends. So I came with nobody, I did a summer school class and I met a couple of friends and that was about it. I’m very outgoing, I’d say. I was trying to talk to people like I was like doing baseball at lunch. I’d like put myself out there and try to make, like, awkward small talk or whatever like that. And then eventually found a group.”

How have your classes at Jesuit challenged you and what aspects of these struggles can you take into the real world or into student council?

Zachary: “But for the beginning of school, it was a breeze.But, I did need to help. And there really wasn’t anybody for me to talk to if I needed to. I remember freshman year, when I bombed a English quiz, and I freaked out. But I thought responsibly and went to see my teacher, and she helped me out. But I like that kind of was like a stepping stone of saying like here’s what these teachers can do for me. I consider myself pretty smart, but I need to apply myself and communicate with my teachers to reach my full potential. Communication with teachers serves as a stepping stone to building good relationships and being able to succeed in the real world.”

Since you guys are both athletes, what parts of the game have affected you both on and off the field? 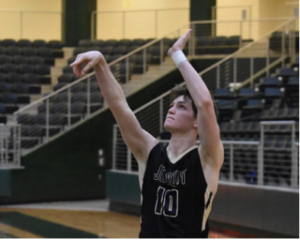 Shane playing basketball- picture by Nash Crawford Shane: “One of the huge things with basketball is communication, not only on the court when we’re talking about defenses or what players were in a run, but also just like communicating with the coach, telling him if we have a meeting with the teacher. For example, I would be a couple of minutes late to practice. I would warn the coaches, and we would remain on good terms. So that has really benefited me in that it’s just become second nature to just be able to communicate with others. And I’ve been more comfortable at being able to ask for help in times of need. I mean, in situations where I might need him and also the trade off to also be dependent on others in basketball as well. It’s a five man sport. You play for each other and with each other, you win as a team, you lose as a team. So I think both on and off the court.”

Zachary: “My ability to communicate with others and my ability to depend on others has increased dramatically for me, for baseball teams, for what I’d say based more on those individual sports at the same time. Pitchers are going to get it there. And so I think the aspect of reliance and trust your teammates is very important because I’m sitting there waiting for my turn, but knowing that my brothers have my back. I got this dude. But you got to know this is going to make this point like I trusted him to make that play. So the formation of bonding and brotherhood and  that bond you’re going to get. It’s very important that you can trust your teammates, because you can’t do it by yourself. But you have to assume you’re going to home and the eight other guys will help you out if you go on base.”

Why do you think that you will win?

Shane: I believe that Zachary and I have a great chance of winning because we have developed a relationship within ourselves that has allowed us to keep each other dependable and reliable. In addition, during our time here at Jesuit, we have both developed and fostered our own individual relationships within the Jesuit community.  Also, having been recognized in the past two years as natural leaders by faculty and staff, Zach and I are both familiar and comfortable with leading by example. Another aspect that benefits us is that we both have similar traits and ideas, but we also participate in such different sports, groups, clubs, and events that we are fortunate enough to have a wide and diverse set of relationships.”

What changes would you make to better serve the Jesuit Community?

Zachary: To help improve Jesuit we are looking to make it a more comfortable and enjoyable experience. Our goal is for the students to wake up excited to come into Jesuit with something to look forward too every day whether that be a casual day, early release, a good lunch or all of the above. And some specific changes would be to have a point system where you can earn points and use them at ranger connection, having a student made playlist for dances, and a spiritual moodle page out with commonly asked questions about things such as the rosary and confession.”

Shane: “If elected as Student Body President and Vice President, our goal as a team and as representatives on behalf of the school would be to make Jesuit the most enjoyable high school it possibly can be! We would want each individual to walk into school with a smile on their face and have them leave eager to start a new day the next. Specific changes that Zach and I would push for is the opportunity to wear school-branded sweatshirts that represent the school’s unity and evokes school pride. Additionally, we would strive to repave the senior parking lot and fix the many potholes present. Another idea would be to better vocalize the “less-attended” sporting events such as rugby, hockey, soccer, etc.”

This was coverage on Zachary Freeman and Shane Hatzmann’s student council campaign. Stay tuned to The Roundup for more news on the upcoming election!