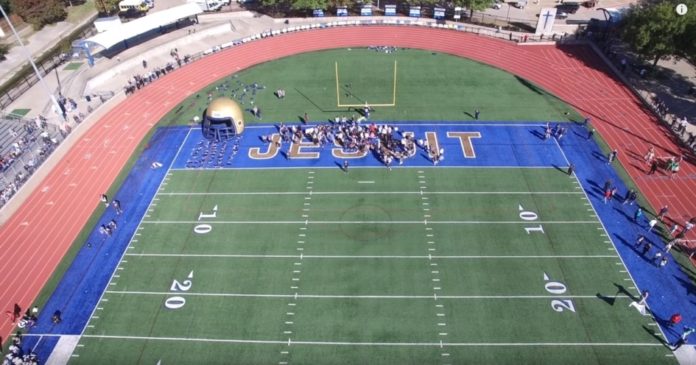 Jesuit Dallas is a unique place. No other school in the area manufactures a culture quite like this school’s, a community bound by faith and brotherhood. And there’s no better way to celebrate this community than Jesuit’s annual Ranger Day.

Ranger Day is a school-wide celebration the morning of the homecoming game. Jesuit’s campus teems with amusement as Jesuit and Ursuline students celebrate community through a pep rally, musical performances, powderpuff football, video games, and athletics.

Ranger Day begins with Jesuit freshmen, sophomores, and juniors flooding into the Walsh Gym for a pep rally. The one dress-down day of the school year, many underclassmen seize the opportunity to stunt the latest Supreme fashion and freshest shoes from southwestsneakers.com. While the hundreds of students take their seats, a drumline consisting of Payton Bilgere ’19, Jaibin Mathew ’19, Gabriel De Conto ’20, John Sample ’20, and Will Ward ’21 plays a catchy tune. Senior Payton Bilgere expressed how special of a moment the opening Ranger Day performance was to him: 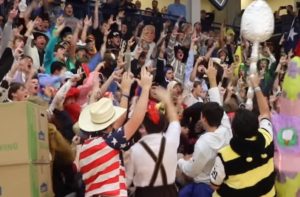 “Every Ranger Day, I’d see the senior drumline members jam out in the middle of the Terry Center for the pep rally. Those guys were my idols as a freshman, and it was really cool to see them play cadences in front of the whole school. However, in years past, the guys never really got into it as much as they could.”

Bilgere continued, “Now that I’m a senior on the drumline, I felt that I could elevate our music from a collection of cadences to hype-up performance art. I feel like we don’t have to just play our drums, but rather craft a stage presence as well. As a result, drumline had a full schedule on Ranger Day.”

Once everyone had taken their seats, the class of 2019 ran into the gym, dressed in costumes ranging from an inflatable dinosaur to Mr. Dion. After the seniors took several victory laps around the gym showing off their costumes, they took their seats and student body president Marco Marrero ’19 began to hype the crowd:

“Reagan and I tried our best to get the crowd into it. My somersault at the start really set the tone for the senior takeover in the competitions. A lot of faculty members mentioned that the gym was louder than it had been in a while, which was reassuring.”

The pep rally consisted of four different competitions to determine which grade was strongest. The strength competitions ranged from the deadlift to karate to pie-eating, but the seniors ended up taking home the bread this Ranger Day, as Vice President Reagan Ernst ’19 commented:

“I think it [the pep rally] went extremely well. The crowd was hyped and even though we had to make some last minute adjustments, we got the job done. I guess the senior class is just really swole!”

“In addition to our performance at the pep rally, drumline played twice in front of the Terry Center, which gave newer freshman players a chance to try new drums. We ran our normal circuit of cadences and shared a couple of teaching moments. A fellow senior Jaibin Mathew and junior Gabriel De Conto played their quint tom solos blindfolded.

It’s in moments like these that you become enthralled in the energy of what you’re doing. There is a sub-woofer-like buzz in the back of your skull, and your blood pumping is replaced with concentrated adrenaline. Bonds are forming, different members of the line are coordinating and groovin’ off each other, it’s an intoxicating environment.

Ranger Day was my bittersweet farewell to JCP Drumline.”

Ranger Day would be incomplete without music. Featured musical performances from both the Jesuit-Ursuline Ranger Band and independent groups, the music resounding across campus grounds set the tone for the jovial day. With sunny clear skies and a nice cool breeze, this Ranger Day provided a great outdoor atmosphere to host some of Jesuit’s student and faculty musicians outside the Terry Center. In the midst of Ranger Day’s exciting events, the mellow music served as a pleasant addition to those taking a break with hotdogs and donuts. 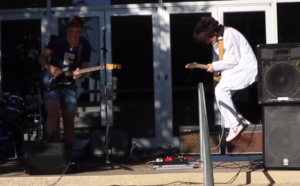 Starting off the day, active Jesuit band Blueline set the energetic atmosphere ablaze with your regular rockin’ covers and creative originals. Seniors Witt Chambers (Guitar/Vocals), Michael Musso (Bass), and Will Roberts (Guitar) ruled the stage while junior Ford Buckner (Drums) settled down behind the kit. Ringing off the walls of the Terry Center behind them, their amplified sound could be heard across the field, encompassing the entire community with a variety of fun music. Junior Will Garoutte added that “the music was a great addition to the day. We students, especially the football team, love watching our boys play.”

Making their second and final Ranger Day appearance, I can speak for Blueline in saying that we have tons of fun entertaining the crowd before the opening kickoff of the powderpuff game!

After listening to the incredible performance of the JURB Drumline, even some of our beloved teachers couldn’t wait to get it on the action. Faculty music featured stunning performances from Mr. Marr, Mr. Berry, and Ms. Desormeaux.

To hear more Blueline, here is the link to their Spotify page.

As Ranger Day began, one of the most competitive and entertaining events kicked off – literally, as the junior and senior powderpuff teams squared off against one another. This year’s senior class, coming off a close loss in 2017, held off a last-second rally by the juniors, coming away with a 13-7 win.

Both sides had strong fan turnouts as both bleachers were packed, creating an electric atmosphere fueled by both teams’ electric plays. For Ford Buckner ‘20, the game “highlights the competitiveness between each class,” as both sides readily attest that they are the more dominant. Senior Witt Chambers views the game as a chance for “the seniors to show prestige over underclassmen” and cement the command of their schools. 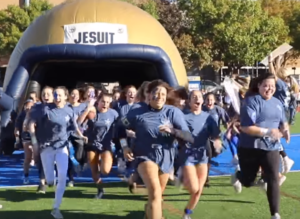 What the fans didn’t see however was the preparation both teams put into the game, with each meeting every Sunday to hone their skills and establish a solid game plan. For coach Andrew Gregory ‘19, the hardest part of practices was “getting the girls lined up and focused”, but he praised their determination and willingness to be taught. Most of the seniors and juniors who participated had watched football and knew the game, but only a few had fully understood the rules that entail. Each team had about five practices to organize their roster (which Ursuline’s student council did a phenomenal job doing), teach the girls their position, and help them execute it at a high level.

As a result, the game played was crisp and entertaining, with captivating touchdown runs by senior Anna Kate, who goes by the nickname “AK,” and junior quarterback Brynson Gill, daughter of former Texas Tech quarterback, Jamie Gill. Other exciting action during the game was the touchdown pass thrown by senior Gracie Grimes, finding the open receiver downfield and delivering a strike that out the seniors ahead 13-0 for the time, adding some insurance points to their lead.

As the final horn ended the game, the senior class stormed the field, celebrating their victory and backing up the trash talk that ensued before the game started. Senior Jack Hajdu claims he knew “all along the seniors would win, never would [they] let the juniors beat [them]”.

As for the players, they got to experience the excitement of football and the emotions of
winning/losing. Catherine Taylor, representing the junior powderpuff team said she “loved the craziness and the great bonding experience” it provided for their class. Junior Brynson Gill claims that 2020 isn’t “losing next year,” already thinking of beating next year’s juniors.

The annual powderpuff game provides the Jesuit/Ursuline community a chance to bond
under the ideals of football and unity, which was on full display during Ranger Day in Postell Stadium. Until next year, the excitement of powderpuff football won’t bring each school back together for another game, but rest ensured that next years game will be as eventful as this one.”

One of the things that most people look forward to on Ranger Day is the freshmen chariot races. A total of fourteen homerooms participated as follows: 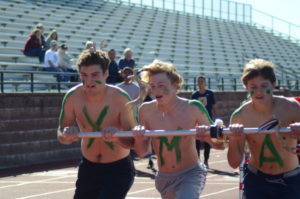 -Mrs. Cox’s homeroom represented the 4th of July with Ford Butler, Chris Cunningham, Charlie Metz, and Enrique Borrego as the runners and Mac McHugh as the senior rider.

-Mrs. DesOrmeaux’s homeroom represented Leif Erickson Day with Will Monsour, William Jackson, Will Inkman, and Walker Houdeknas the runners and Nick Parigi as the senior rider. 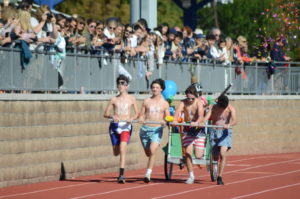 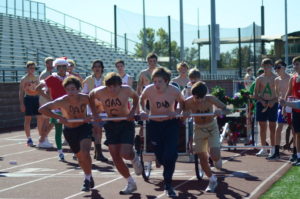 Jack Tchoukaleff ’22 from Mrs. Richard’s homeroom said that the race was a “very fun, but tiring experience.” Other runners would agree with what Jack stated. “It was crazy with everyone cheering… running [the] chariot and afterward was accelerating,” stated Will Reading ’22 when asked on what he thought about the races. Most freshmen would know what Will was talking about if they were watching the races. Whenever the runners came by, everyone in the stands started to scream and cheer. Even though it looks like normal running, Jackson Richard ’22 describes the race was “more of a mental race than a physical race.” In the end, it came down to two homerooms: Mr. Acevedo’s and Mrs. Lahey’s homeroom. Eventually, Mr. Acevedo’s homeroom would take the crown. What a great way to usher in the Christmas season!

Ranger Day would not have been made possible without the meticulous planning from Student Council and faculty behind the scenes. Student Body president Marco Marrero ’19 expressed his gratitude:

“A lot of planning went into this year’s Ranger Day. Shoutout to the senior student council members: Matthew Mancillas, Hector Juarez, and Michael Musso. They all volunteered to be a part of it and did a great job. Shoutout to all the student participants as well, as we couldn’t have had the competitions without them. Also, the faculty helped out a lot in making sure the event ran smoothly and was appropriate for the entire school. Shoutout to Mr. Hanley, Mr. Fitzsimmons, Mr. Shoemaker, Mr. Knize, and our police officers, Officer Crawford and Officer Finestein. As well as Mr. Montgomery for stepping in last minute and taking over the music during the skits. We feel really fortunate to have such a great group of people contribute in organizing and helping run the assembly.

I can’t stress enough how important all the support we got from students and faculty was in making this Ranger Day great. Go Rangers baby!”

And with that, this year’s Ranger Day came to a close. It was definitely one for the books.

Stay tuned to The Roundup for more Jesuit event coverage.