More
JesuitRoundup.org is brought to you by:
The Ashmore Family
Sports David Reichert – Ranger of the Week
Facebook
Twitter
Email
Print 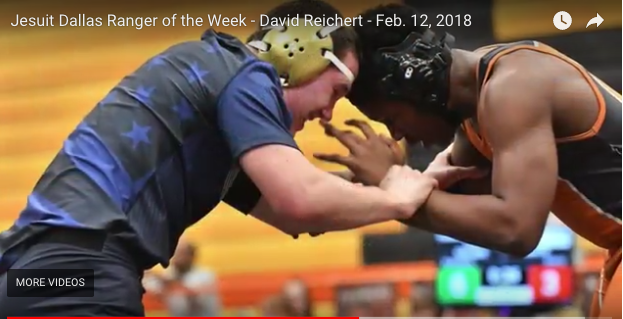 Reichert became the first Jesuit Dallas wrestler in three seasons to win an individual district championship, capturing the 182-pound championship at the University Interscholastic League (UIL) 7-6A Championships on Friday in Rockwall.

The junior went 3-0 at district to earn the championship, scoring a pair of decisions before scoring a 12-1 major decision in the championship match against Skyline’s Eli Zuniga. He won 6-3 over W.T. White’s Jallah Avery in the quarterfinal before earning the title match berth with a 12-8 decision over Richardson’s Lino Ceja. Reichert earns his first regional tournament berth with the district championship, becoming the first Ranger to win a weight class at district since Shane Ross in 2015.