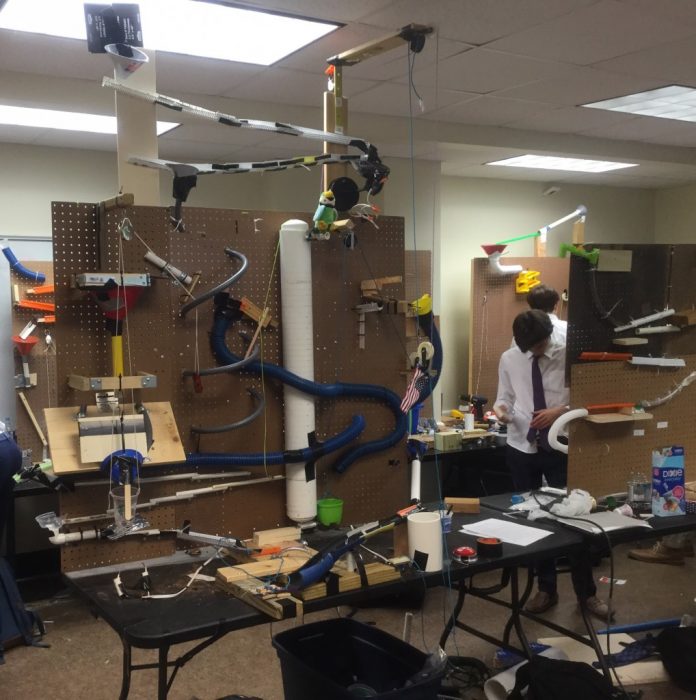 “Hey! Can I borrow your drill (or hot glue gun, or a couple zipties/screws)?”

“Are you gonna use this [insert vital piece of project], or do you need it?”

“When does this period end?” *bell rings*

Amid these commonplace inquisitions, the whirring of drills, cutting of wood, or the occasional (constant) dropping of a hammer, the annual physics Rube Goldberg projects are heard being constructed (God bless the classrooms in B hallway underneath). The Rube Goldberg project is a month-long physics production that incorporates virtually all of the components of physics learned throughout the year.

3 simple machines, 5 energy conversions, and the incorporation of a circuit are only some of the more basic requirements for the project. The projects are constructed completely by the students, with the only non-homemade items being batteries, light bulbs, and switches.

Split up into groups of four including classes from all 3 physics teachers, the students are tasked with revealing, raising, and waving a flag with their machine.

According to junior Lorenzo Genera, “this project was harder than expected, but it was well worth it in the end.” In addition to building the Rube Goldberg machine, the students submitted video blogs each week to detail their progress and to explain their process.

Robert Hoover ’18 claimed that “[theirs] is the best” and that “it’s amazing.”

However, for most groups, the project construction process was not “amazing” or “the best.” Limited to a single table and not provided with a plethora of materials, some groups had to race against the clock to finish on time.

“The project was all about communication,” junior Diego Anglogbaldo explained. “One person would build something and then not tell anyone what its purpose was, and then the next class period another person would take it apart and move it elsewhere.” 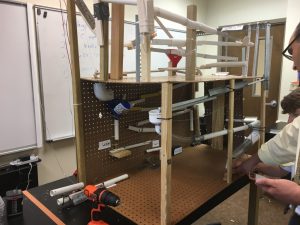 This frustrating game of building and then destroying set some groups back days at a time, and most groups ended up putting back what they took down after they had discussed the design again.

“Once we finally got the design down we could actually finish the project,” Jake Frick ’18 commented. “Then all we had to do was finish on time.”

Junior Andrew Trautman explained that the project was “difficult but enjoyable” and that he “liked working with [his] classmates.”

Overall, the project was largely successful in how it allowed the physics students from all classes to work and communicate together to showcase what they learned in one project.

“The guys have really progressed,” physics instructor Ramsey Kweik explained. “The project has been an excellent summary of what we have learned throughout the year.”

The physics teachers will announce the winners of the best time and the best design at junior convocations on May 18th, 2017.