NewsPaperThe Student Voice and Newspaper of Jesuit Dallas since 1942
Viewpoint Culture What Do the Kavanaugh Hearings Really Mean for Our Future?
Facebook
Twitter
Email
Print 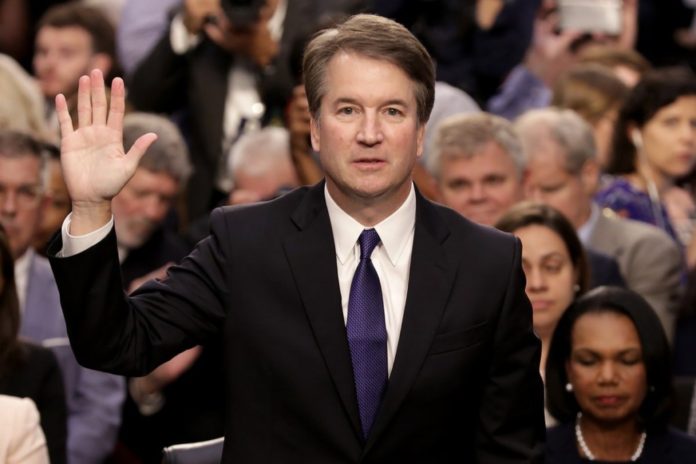 Three months after his initial nomination by President Trump, we seem to have reached the climax of the Brett Kavanaugh confirmation hearing. Both sides of the political aisle are dissecting every sentence that comes out of Kavanaugh’s mouth. The media is intensely examining the misconduct allegations waged against him. With turbulent political discourse surrounding the hearings, many Americans seem to be asking the same question: why?

Who is Brett Kavanaugh?

He served as a Supreme Court clerk under Justice Anthony Kennedy dating back to 1993. Appointed twelve years ago by President George W. Bush, Kavanaugh was selected to serve on the DC Court of Appeals, considered to be the second-most important court in the nation, behind only the Supreme Court.

Kavanaugh has had 48 clerks in his twelve years on the circuit, of which he says the majority were female. He has also said that if confirmed, he would be the first justice to have an all-female clerk staff.

All these things considered, Kavanaugh seems like quite the upstanding citizen, even after three separate claims of sexual harassment and misconduct. Though unproven, these allegations still cause damage to his public perception. The claims have put not only his character into question, but have smeared his name.

However, I don’t believe the allegations are the biggest threat to his confirmation.

The Impact on the Supreme Court

The underlying incentive of the allegation is to delay Kavanaugh’s confirmation. Senator Dianne Feinstein first heard the misconduct allegations over six weeks ago but chose not to present them until right before the confirmation vote. While it seems unethical to drag out the hearings and withhold information, it is also tough to blame them for what they’re doing.

Kavanaugh is Trump’s nominee which already works against the left. If confirmed, he will be the second justice appointed by Trump to the Supreme Court. Trump’s first appointment, Justice Neil Gorsuch, joined the Court last year and is considered a conservative judge. Other conservative judges include Clarence Thomas, Samuel A. Alito Jr., and John Roberts.

For those of you keeping track at home, that’s four current conservative judges of the eight currently serving on the bench. If the hearing committee confirms the Kavanaugh, the Supreme Court will have a conservative majority, spelling trouble for the Democrats.

The oldest of these Justices is Clarence Thomas who is 70, 15 years younger than the oldest liberal judge. Ruth Bader Ginsburg at age 85 is only five years younger than the oldest Justice ever. She also happens to be a very left-leaning justice. Brett Kavanaugh, on the other hand, is only 53 and more right-winged, hopefully endowing 25 years of conservative principles on the court.

The Impact on Law Making

Kavanaugh is not just a swing seat on the bench, but he could overturn some major decisions. Many are worrying he will overturn the landmark abortion case Roe v. Wade. This prospect has been a major factor in why the Democrats are trying to block the confirmation.

If the Supreme Court blocks more liberal laws, the United States could return to the low level of policy approval that we last saw under former President Barack Obama. Policy blocking could potentially stall the American government and damage the country as a whole.

That said, Kavanaugh’s confirmation could also lead to a law-approval rate for Conservative-endorsed bills that we haven’t seen since Reagan’s presidency. He could be the key in keeping the current dominant foothold that conservatives have over Washington.

Even if Trump or another conservative president isn’t elected in 2020, the conservatives would still be dominant. They would still be in the majority, with 2/3 of the government branching under their control. Confirming Brett Kavanaugh could result in conservatives seeing their law-making approval rate skyrocket.

What This Means for the Future

The confirmation of Kavanaugh has an immense impact on the future of our country and our laws. The lawmaking potential for conservatives is sky-high and could lead to the revitalization of America and our government. It could also lead to serious law-blocking and the stalling of policy approval for liberals. Kavanaugh’s appointment to the Supreme Court could have great upside for conservative politicians while also dealing a massive blow to liberal lawmakers.

These hearings have caught my attention from their inception. Not only because they have been in the news for weeks, but because this man could help form the body of American laws for the next quarter century. I hope to live in the United States and raise a family here, and I want for the laws to reflect not just my beliefs but also what’s right for the country. With amazing qualifications, background, and character, I believe the right man for that job is Brett Kavanaugh.

Stay tuned to The Roundup for more developments in the Kavanaugh hearing.