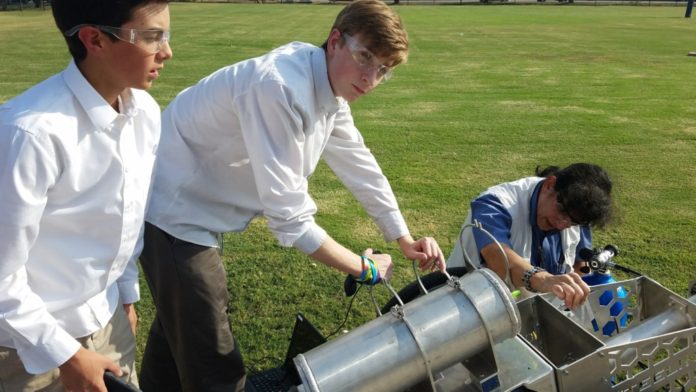 A ball of colorful cotton streaks through the air, drawing everyone’s attention, landing softly into the crowd’s raising hands.

The T-shirt Cannon, created by the Robotics Team, has been one of the many machines that the internationally recognized team has created. While many people have heard about the cannon, many do not know about the history behind it.

As Aidan Koch ‘19 said, “The T-Shirt Cannon was originally built in 2011. At first it was supposed to have a pitch, yaw, and a cycling system for the T-shirts, but the yaw was the only system that was fully functional.”  (A yaw is something that allows the machine to swing back and forth at a regular speed on the x-axis). Aidan Koch ‘19 then went on to say, “Eventually the cannon couldn’t turn anymore so it was scrapped for parts for the Robotics Team’s other robots. This year, we replaced missing solenoids (coils of wire acting as a magnet when carrying electric currents), electronics, and improved the missing components. We re-added a pitching mechanism to maximize efficiency for each shot and then modified it to shoot golf balls for the Magis Golf Tournament. After month of work, the cannon can now change its pitch, fire a golf ball farther, and can have the shot predicted using a computer.”

The t-shirt cannon is only used at the Magic Golf Tournament and football games. But it will not be used until it has been fixed and adjusted to suit the situational needs. Of course this will take some time because of how long it takes to fix and adjust the intricate machine. Ian SymSmith ‘19 continued, explaining that  “Fixing the t-shirt cannon has been an open project for a year or so now, and the robotics team mostly just suggests the idea of fixing it to the teachers on the robotics team.”

The t-shirt cannon is one of the many things that the Robotics Team has created. They have created many machines, some have helped Jesuit win competitions and some have entertained us. The t-shirt cannon is a source of pride because not many schools have one that has been created by the students. It is a useful tool during events because it makes the crowd interested and excited in whatever they’re watching. It helps pump up the crowd during a football game by focusing the crowd’s attention. The t-shirt cannon has a promising future ahead of it along with the rest of the machines that Robotics Teams can create.