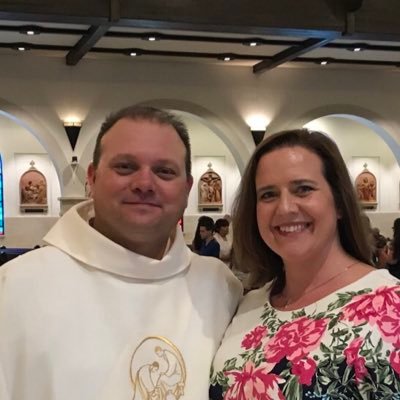 Many know him as a coach, others as a teacher, and few as a father. With the start of this new school year, Mr. Chris Knight has also added deacon to his repertoire.

Who would’ve thought that one of our own teachers would become a part of the clergy in the Catholic Church? Mr. Knight was ordained a deacon in the Diocese of Dallas on June 2nd, serving the St. Rita Parish Community.

Mr. Knight has been an English teacher at Jesuit for many years, currently teaching classes at the sophomore and senior levels. He can be spotted around the school helping out with prayer services and praying the rosary during lunch.

The Roundup: When did you receive the call to the diaconate?

Mr. Chris Knight: I will say that we started praying and discerning a calling to the diaconate around the early 2000s. Father Raymond Fitzgerald and I talked about it quite often, about how young Catholic men and women so often go off to college, and when they become adults, they struggle with their faith. Or they tend to leave the church for a period of time, and Father Raymond felt this was because they don’t necessarily feel like there’s a place for them to serve.

TR: How did your family factor in your decision to become a deacon?

CK: Leanne, my wife, actually wasn’t on board at first. She wasn’t unsupportive, but it’s definitely a formation through the husband, wife, and kids alike. When the class of 2006 started, she did not feel that I was being called to be ordained at the time, so she continued to pray about it and I continued to pray about it shortly after that class started. She came back to me and said that she did feel that I was being called to the ordained Ministry, the diaconate. Unfortunately, the class had already started, so I had to wait until 2012. We started in 2012, so that’s when my formation class started. Six years later in June of 2018, I was being ordained by the Bishop as a deacon.

TR: How supportive was your family of the decision?

CK: My family was very supportive. My family is not really active in the church and hasn’t been for a long time. My in-laws, my wife’s mom and dad, agreed that they would help us because we had Chloe and Connor, and Caleb was little at the time, only 15 or 16 months.

My wife’s family was extremely supportive. Shortly thereafter, my father-in-law decided to move back up to St. Louis from Plano. My mother-in-law would fly down once a month to watch the kids, and did that for a year. We know we couldn’t have done it without her.”

His oldest daughter Chloe, a junior at Ursuline Academy, expressed her support: “I am so proud of my dad becoming a deacon. I’ve seen all of the hard work that he put into the diaconate and am thrilled it has become a reality. It’s helped our family form into a strong Catholic family, and I’m especially grateful for that.”

TR: How was your trip to Europe last year?

CK: We did go to Rome the summer after my ordination. We went to all of the churches and cathedrals, and it was simply amazing. We went from Rome to Spain, walked the Camino de Santiago, which was an amazing experience, to say the least. The beautiful weather just sealed the deal.

TR: Which of your vocations is your favorite?

CK: Well, being a husband and a dad, that’s my favorite. That’s first and foremost the ultimate vocation because I was called to that first. All other jobs are secondary. I’ve had a lot of different careers over the years, but most of them were not vocations. I would say my vocation to my wife as her husband and my vocation to my kids as their dad are probably my favorite ones. And it’s probably the most challenging one. The diaconate is probably going to be a very challenging one as well, but it is always worth the challenge at the end of the day.

Deacon Knight is called to be a positive role model: in his words, “a strong married Catholic man,” to show the Jesuit student body that they can still serve in the Church regardless of their individual vocation. He ultimately strives to inspire Jesuit students that each one of us “can be a normal person: a coach, a teacher, a husband, a dad, a friend and whatever else you find meaning in.”

Stay tuned to The Roundup for more news on the Jesuit faculty & staff.