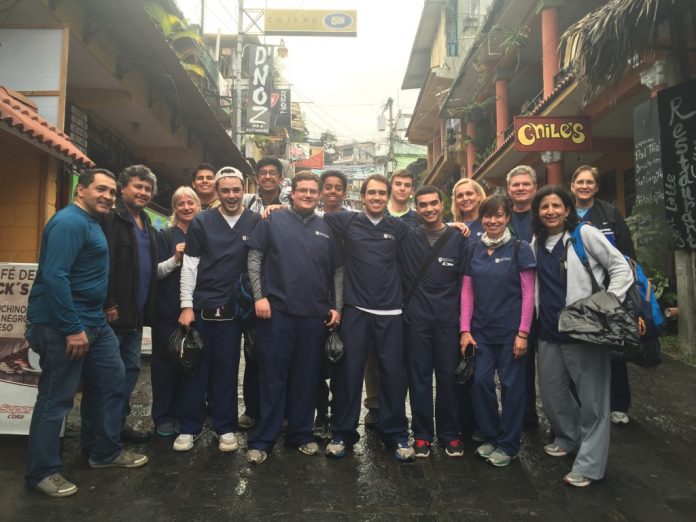 Eight Jesuit students walk out through the glass doors of the airport and emerge into the heart of the city. Surprised, each looks left, then right, attempting to orient themselves with their new surroundings. Their new surroundings are drastically different from life at home, as they see how life can be in other parts of the world. 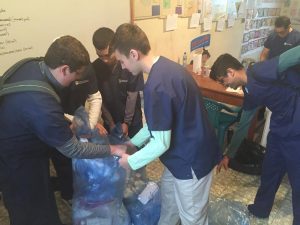 This was the scene over the week of spring break, March 6-12, as the Jesuit Medical Society embarked on their annual mission trip to Guatemala. Every year, the Medical Society plans a trip to the rural parts of Guatemala in order to allow students to see other parts of the world and to help some of the people there who are unable to receive consistent medical care. While there, the students offer relief to the citizens there, not only through the supplies that the collected from the drive earlier in the year, but also by setting up various clinics to help the people with things like dental cleaning and hygiene. The Medical Society students  worked in three different clinic settings in nearby villages and saw over many patients. The drugs and supplies undoubtedly made a huge impact on the lives of those patients.

Mr. Von Schlehenried noted how this year was especially important to him as, “This was my first time planning and executing the trip without the wisdom and guidance of Mrs. Jones so it was a bit nerve-wracking. Although I planned last year’s trip, Mrs. Jones was here to help if I needed and her wisdom went a long way when I wasn’t sure what to do. I had to rely on her spirit this time.”

This year, eight Jesuit seniors went on the trip: Josh Cobler, Mabeth Diaz, Martin Garza, Aaron Vengalil, Andrew Arraj, Jake Wilemon, Noah Patton and Kassa Kassahun along with Dr. Paty Lesczynski, Dr. Rhonda Walton, Dr. Yolanda Brady,  Dr. Tim Robinson, a dentist and Jesuit graduate, Mr. Kevin Garcia, Jesuit graduate and supporter of the missions, and Ms. Kathy Bennett, a social worker,  who all attended with Mrs. Sanchez and Mr. Von Schlehenried. Unlike the previous year, the group stayed in a new town, Santa Clara La Laguna, which according to Mr. Von Schlenhenried “was much more primitive than before and there was absolutely no tourism. In the end, I thought this was a good situation because it allowed us to be focused on the people and our work and not distractions like shopping for cool Guatemalan items.”

Andrew Arraj shared his reflection on the mission trip: “My experience started just like those of every other student, arriving at the airport in the wee hours in the morning and checking in our medicine bags with the DFW employees who would have rather been anywhere else. After arriving in Guatemala City, we were greeted by a fellow Jesuit grad and a separate panhandler with a condition we would never see back home. Apart from the chronic allergies, colds, and malnutrition, two cases that I was able to be a part of changed the way I looked at sacrifice and love.

The first was a fifty-year-old man who was paralyzed from the waist down due to a terrible fall from an avocado tree. His daughter had to leave her job in order to care for him. She, a young woman in her early thirties, had to carry him around in a plastic chair. When another student and I attempted to carry him up a small hill, we found him to be very heavy and couldn’t imagine how his daughter did this every day.

The other case helped me realize the role I personally played in caring for and being there for the inhabitants of the rural village, Santa Clara La Laguna. The man also fifty years old, had a gaping ulcer in his leg that ate away at his skin and top layers of his muscle. One of the only ways to save his leg was to painfully tear away all the dead and infected tissue so that we could get to the wound.

My only job was to be there for the man, reassure him with my limited knowledge of Spanish, and hold his hand. Despite the cultural and language barriers, we all shared the same basic elements that make us human. When in line for the dentist, a child was crying and we asked if he was scared of seeing Dr. Robinson. The child replied that he was not seeing the dentist; however, he wanted more of the pediatrician’s bubbles that she handed out to all the patients. A sense of community was formed between the students, faculty, and the doctors because we all realized the importance of that community in order to fulfill our mission. With that, we all worked together and enjoyed doing so in order to fulfill our mission and bring medical care to the under-served Guatemala.”
Well, the Medical Society’s trip to Guatemala was undoubtedly a success, make sure to tune into the Roundup as the Medical Society continues its phenomenal year with more events coming in the near future!