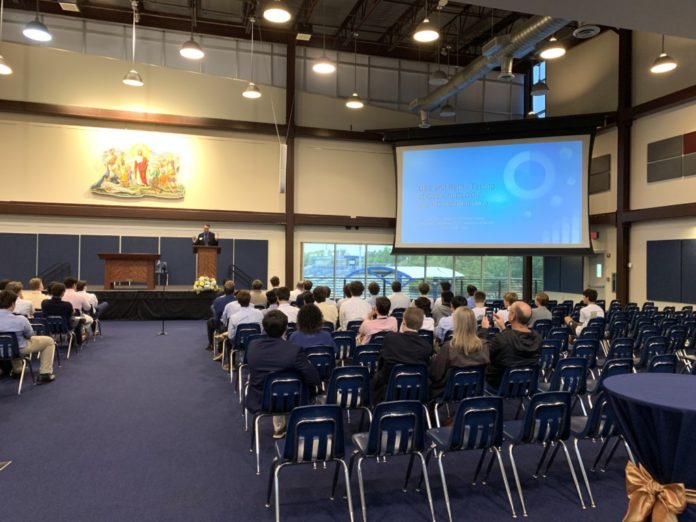 Over the summer of 2019, three students of Jesuit’s Medical Society participated in the S.T.A.R.S. Program. The S.T.A.R.S. (Science Teacher Access to Resources at Southwestern) program for students is a research program where students are paired with a mentor that helps them as they conduct research. With the help of the mentor, the students select a topic and research that topic throughout the program. Towards the beginning of the school year, the researchers practice giving their presentation for the coming event.

The application is similar to college applications. One submits an essay, a resume, and test scores among some other things around wintertime. Then in the spring, representatives from the S.T.A.R.S. program hold interviews. They ask about interests, extracurriculars, how you have gotten involved so far. The program accepts three rising seniors from Jesuit every year. Please speak to Mrs. Boyle or Mr. Von Schlehenried for more information about the program and applying.

Will Nickols ’20 commented on his experience applying, his time in the program, and making his presentation: “I was very nervous when applying to the program.  I knew that everyone who gets accepted into S.T.A.R.S. is extremely smart, and I had listened to the extremely complex presentations in the past years with no idea of whether I could understand material on that level. Being accepted into the program, I felt very proud, and I was pleased that my hard work paid off, but I knew that there would be much more learning and many more challenges in the near future. During my time at UT Southwestern, I learned an incredible amount about my specific project related to RNA G-quadruplexes through reading tons of background research. I met some incredibly smart students my age through the program, and I also met some very motivated people in the lab who are contributing to a very important field. Making my presentation, I tried to bring down the material to a level where most other students in the audience could understand it. After the presentation, some questions and comments showed that I did not quite accomplish that goal. However, during the “my thoughts” section, I think I effectively explained that everyone who joins the program will eventually understand his particular material in a similar, thorough manner even with no previous knowledge.”

The three members of the program from Jesuit this year were Ermias Belay ’20, Jack Casey ’20, and Will Nickols ’20.

Jack Casey ’20 examined the effects of the CLOCK gene in developing mice as well as the differenced between huCLOCK (humanized CLOCK) and mice CLOCK. The CLOCK gene was identified as one of the hub genes of a human-specific brain co-expression network and is known in having a role in controlling circadian rhythms and psychiatric diseases. Casey created three groups of mice, Wildtype, Knockout, and humanized. The Wildtype had the natural CLOCK gene. The KO mice had no variations of CLOCK at all. Finally, the humanized mice had the human version of the CLOCK gene. Casey used a series of reflex tests to test the mice between 4 to 10 days old. Casey found that groups with the gene outperformed the KO mice, and the huCLOCK group outperformed the mouse CLOCK group.

Will Nickols ’20 researched DEAD-Box RNA helicase binding with G-Quadruplexes. RNA is formed from DNA in the process of transcription. Because RNA is single-stranded, it can fold over on itself to form secondary structures. G-Quadruplexes are knots that form as secondary structures when there is a lot of guanines, one of the four main nucleobases, in a sequence. These knots inhibit translation and present implications in neurodegenerative diseases like ALS, FTD, or Fragile X Syndrome. Nickols concluded that in Wild Type mice, binding occurs at a normal rate, but there was substantial abrogation with n-terminus mutation.

When asked about his experience presenting, Ermais Belay ’20 remarked, “Since at the end of the program we were required to present our research to many people and [since I’ve spoken] in prayer services, I felt pretty prepared to present my research in front of a crowd. I did feel a little nervous at the beginning,  but as I began to speak, I felt more and more comfortable and let my research basically present itself.”

Jack Casey ’20 commented on his experience presenting and answering questions from the audience: “I was naturally a bit nervous before the presentation, but as I got started I felt a lot better.  I was surprised when I got some questions, but I did not have a lot of trouble answering most of them.  I did get a curveball from someone in the audience, a theoretical question about if I thought this type of research (placing human DNA into the mouse genome) was fully ethical.  Even then I had a lot of fun answering the question.  In general, I was very well prepared by the S.T.A.R.S. program, even for weird questions like this.  You actually get a lot of practice explaining your research and reasoning in the lab.

A big thank you and praise for the people at UT Southwestern, the S.T.A.R.S. Program, Jesuit Medical Society, and our Jesuit researchers.