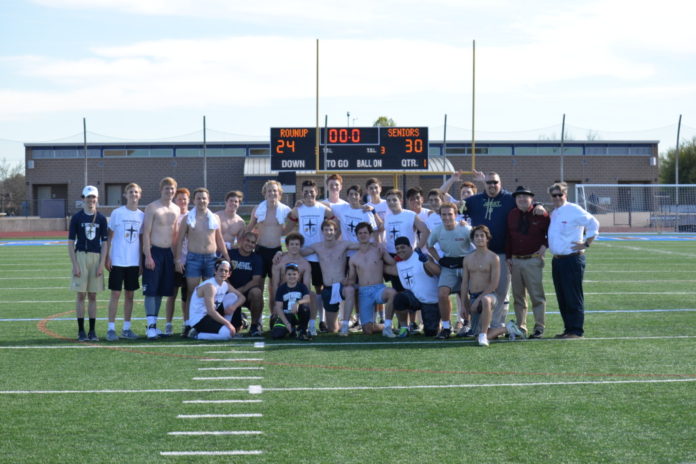 In the weeks leading up to Jan. 23, tensions between The Roundup and the varsity football team were high. Twitter was ablaze. Everybody was talking about one thing, and one thing only: the 2018 Expository Bowl.

But, the football team saw to it that the football game would not be played in January, orchestrating an influenza outbreak in order to delay what seemed like an inevitable defeat.

Make no mistake, the football team was scared, but they had every reason to be — The Roundup came out swinging this year. In fact, the varsity football team only won by one touchdown, 30-24.

After a lengthy delay, the Expository Bowl was finally played on Tuesday at 4 pm in Postell Stadium.

The Roundup took control in the first half.

“It was embarrassing for the football team,” said Miramontes. “They put on such a weak start. They scored the first goal, to be fair, but we scored three unanswered goals… Will Fynes was a great quarterback. He was looking up the whole time… I caught those balls. I was balling out there.”

All this balling drew a crowd. Rudder Allison ’19 was among the many spectators present.

“It was great,” Allison said happily. “There was a lot of spirit for The Roundup. I don’t think anyone was cheering for the football team, but whenever The Roundup scored, everybody went crazy.”

The newspaper’s offensive style turned out to be short passes and long drives. The shorter passes seemed to be more effective than Towns’ longer passes, possibly because of the large number of players on the field at any given time.

The Roundup led 18-6 heading into the second half, a shocking margin that left the football players shaking in their shorts. Brandon Hickman, who coached The Roundup, was very happy with the performance thus far.

Even the football team’s coach, Michael Degen, Ph.D., acknowledged The Roundup’s dominance: “I thought we were going to lose. I mean, the newspaper was pounding them the first half. It was looking like a bloodbath, but I guess we finally woke up.”

Football woke up in the second half.

The seniors really pulled themselves together in the second half, recovering from the embarrassing first. They scored four unanswered touchdowns, and The Roundup would only score once more before time ran out. The final score was 30-24 in varsity’s favor.

However, The Roundup fought all the way up until the buzzer. A final Hail Mary from the football team as time ran out ended up in the hands of Fynes, who had a chance to score the tying touchdown on the last play of the game. Unfortunately, he was stopped, but he was still happy with how he played.

“I think I put up one of the best performances of my career,” he said afterward. He explained his teammates’ support is what kept it a competitive game.

For Reed Zimmermann ’19, The Roundup’s Chief Associate Editor, it wasn’t that they came back so much as The Roundup let them come back. “We honestly felt so bad for the seniors that we let them score,” he said. “That’s why they won.”

For Fynes, it was the jorts: “The jorts were really an extraordinary thing to play against, but from a gameplay perspective, I think they didn’t expect the punch that our offense gave them in the first half. They didn’t study the game film… I really think the varsity football team under-performed.”

Parker Towns was more optimistic, saying, “I’m just glad that you all got to come out together and enjoy a good game and that no one got hurt, which is good. Despite the trash talking, I think everyone had fun.”

The game did end with everyone in high spirits and with both teams shaking hands. Fletcher Rosenbleeth ’18 in particular didn’t want to skip anyone, even going back into the handshake line again to ensure he congratulated everyone on his performance.

Despite all the trash talk on Twitter, on jesuitroundup.org and in the hallways, both teams gained a mutual respect for each other on Tuesday. This was one for the history books, and it has set a high bar for 2019.