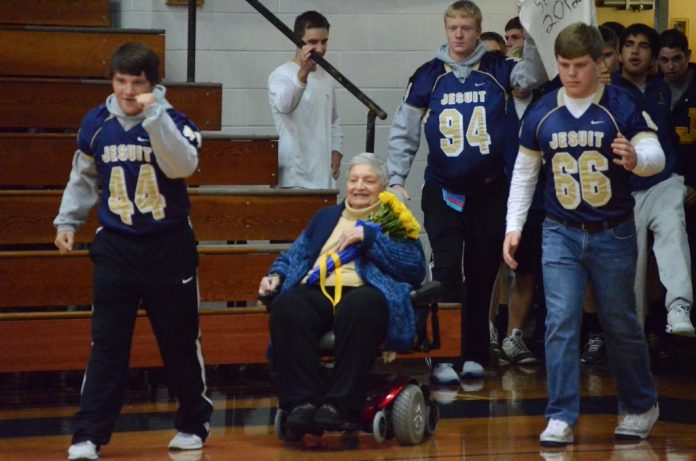 “Kay is somebody of strong opinions. She is feisty and is very dedicated to the school and Jesuit’s education, but she is also very caring. She is certainly capable of standing up for herself.” – Fred Donahue, Admin.

Go back 43 years ago to a time when 3D-television was a thing of dreams, when Jimi Hendrix serenaded the country with the sweet ‘twang’ of his guitar, and when Jesuit students rocked long, flowing hair while seniors walked the hallways in obnoxious, multicolored eyesores which passed for blazers.

Except for perhaps the blazers, Jesuit of the 1960’s was a hugely different world. If one were to walk the halls back then, he would notice one key part of modern Jesuit was few female teachers. So, when Jesuit opened its doors to women, Mrs. Kay Frigo was one of the first to apply for a job.

Unlike Jesuit today, where only a few Jesuits now teach, in the 60’s priests and scholastics filled the halls carrying lesson planners and red-inked tests. Now, non-clergy members of the community teach most of the classes, from biology to English, to the social sciences. Mrs. Frigo would soon be recognized as one of the most caring and dedicated faculty members ever to be seen at Dallas Jesuit.

“My first encounter with Kay was hearing a strong booming voice coming from her classroom and I knew then that she was in control. Fear was my first experience and then I realized that Kay had a real gentleness to her and that she was someone that you could always open up to and that she would listen. We had great conversations over many topics.” – Jan Jones, Science Dept.

Mrs. Frigo, the loving mother of three children, two of whom entered teaching themselves, came to Dallas Jesuit after spending 13 years at the St. Louis Jesuit School. She started by teaching Latin at our sister school, Ursuline. Theology teacher Michele Elchlepp was one of Mrs. Frigo’s Latin students at Ursuline. Back then, the young Ursuline ladies rode a bus to Jesuit to take Latin while the Jesuit boys went down to their counterpart for typing lessons.

Ms. Elchlepp comments about her experience with Mrs. Frigo as a student in comparison to being a co-worker. “It is much better to be on equal footing. Back then, I was not a good student. [Mrs. Frigo] used to give us ‘F’ minuses. She has always been very direct when she speaks and she will tell you about anything.”  Mrs. Frigo and Ms. Elchlepp share a tight-knit relationship. “I have known Kay since I have been 12-years-old. Her daughter Cathy and I are best friends. I was even the Maid of Honor at Cathy’s wedding.”

“Just thinking of Kay makes me smile – in gratitude – for being an excellent role model for me in many ways by demonstrating the importance of women in leadership. She helped pioneer the leadership opportunities afforded by the JSEA and encouraged others to take advantage of these programs and gatherings that continue to support the mission and vision of Jesuit education. I also can’t help but smile because she is pretty darn funny! Running in to her was always a day brightener for me!” – Kathy Hoskins, Fine Arts Dept.

Mrs. Frigo has always been interested in the theological and spiritual aspects of education. For many years before Ms. Elchlepp, Mrs. Frigo was the head of the theology department, one of the first women to hold a major leadership position in the school.

When Mrs. Frigo arrived, there was only one retreat at Dallas Jesuit, a senior retreat centered on scriptural reading and religious study. Mrs. Frigo, however, believed that the retreat needed to be more focused on the students and personally engaging. Her perseverance led to the creation of the Jesuit legacy known as Community Days, an innovation now considered a great Jesuit tradition as well as the highlight of many students’ experiences during their high school careers.

“When I was a student, Mrs. Frigo taught me life lessons like delaying gratification and modeled what an active, devoted, questioning, deep faith looked like. As a colleague and friend, she showed me toughness and commitment and love. Thank you, Kay.” – Rob McGhee, English Dept.

Mr. David Oglesby, senior counselor, was one of the four people on the panel that created Community Days with Ms. Frigo at his side. “The panel noticed that Jesuit was lacking a sense of community, a sense of bonding.”
Mr. Jack Fitzsimmons, senior counselor as well, was one of the first students to experience Community Days. “At first,” he says, “they were like a series of exercises to help with our bonding. Her son Tony and I were classmates and we really enjoyed the idea of working with the community.”

Mrs. Frigo initially instituted Community Days as a weekend event centered on the development of student relationships, but her idea grew into a three-day experience that any alumni will point to as one of the most moving experiences Jesuit has to offer. “She came up with the idea of making the retreats both fun and serious, by incorporating the idea of Ignatian Spirituality, “Fitzsimmons explains. “The retreat experience should be a positive, informative, growth experience for these young men.” She believed that all students deserved a retreat experience every year, and she worked tirelessly to create retreats for all grade levels.

“Kay was the first person to welcome me to the faculty back in 1979. Over the years she served as my mentor both professionally and personally, but, more importantly, she has been one of my dearest friends.” – Sheryl Row, English Dept.

Not only did Frigo have a profound impact on the senior year experience with Community Days, but she also implemented opportunities for the underclassmen to become better “Men for Others.” When she came to Jesuit, she brought with her an understanding of how a young man should spiritually grow.  This idea would later become a part of the Jesuit Profile of the Graduate at Graduation.

Frigo also promoted social awareness, bringing her students to the Holocaust Museum, a field trip which is now a sophomore tradition. Mrs. Frigo’s efforts to broaden the Jesuit experience for all students have been a total success, and her tradition and legacy carry on today. You can read more about this year’s Holocaust Museum trip at https://www.jesuitroundup.org/?p=4966.

An added example of Frigo’s hard work and dedication to her students is her service as the swim coach at Jesuit.  She woke up at 4:00 a.m. every morning to instruct her students. In addition to becoming the coach at a major high-school, she also took on the responsibility of the moderator of Student Council, positions currently held by Dr. Michael Degen and Mr. Colin Hanley. Even today, Mrs. Frigo exemplifies the qualities of a Person for Others, and her dedication towards improving the Jesuit community goes unsurpassed.

“Kay welcomed me with open arms – and mind- when I joined the JCP faculty. Her special charm, wit, demeanor, and integrity serves as a model for all as a ‘woman for others.’” – Anne Blackford, Math Dept.

Many faculty and staff lament that Mrs. Frigo is not at school as often as she was in the past; however, each person is thankful for her contributions to the school. Some stories are more personal than others such as Mr. Fitzsimmons’ story of when he was a sophomore in 1974. “She taught my sophomore theology class which was not that different in comparison to today’s class. She loved our class very much, so, she arranged to have a meal in which she would cook for us. Almost like a field trip, she arranged for the whole class to go to her house and have a full-on Italian food feast with spiritual work in between the immense portions.” Mr. Fitzsimmons also said that he and his wife still share a close relationship with Mrs. Frigo. “I remember that during the winter months in the blazer season, Mrs. Frigo would always wear the same red sweater. On her 75th birthday, my wife and I gave her a new red sweater to commemorate the good-old days.”

“Humor, compassion and faithfulness are characteristics that I first recognized in Kay some 27 years ago. And I do believe she still possesses them!” Pat Naughton, Admin

Likewise, Mr. Earsing commented, “From someone who was one of my mentors, she has been a counselor for me with this job and in dealing with the students. While I was principal, Kay helped me with development, Student Council, and many other things in our Jesuit community. She is unfortunately sick with shoulder and back problems, but she is still present in our hearts and minds.”

Kay was a source of inspiration and guidance during my first years of teaching at Jesuit. I will forever remember her words of wisdom.” – Karen Lahey, Foreign Language

Mrs. Frigo has been a Jesuit icon for 43 years and is still a vital part of our community. This year she led the senior class into the gym for Ranger Day as if in a marching band.  When she is physically able, she substitutes in the classroom. Mrs. Frigo serves as the perfect role model for any student. She takes great joy in her time at Jesuit and loves to be around the students she influences every day. You can read about Mrs. Frigo’s experience as a homecoming band leader at https://www.jesuitroundup.org/?p=4952.

Mrs. Frigo is a fantastic woman who set the bar high for faculty, teachers, and students alike. For this, we celebrate her accomplishments and show our appreciation of all she has done for the community.