More
JesuitRoundup.org is brought to you by:
The Ashmore Family
Campus Life Exchange Program A Taste of France at Jesuit
Facebook
Twitter
Email
Print 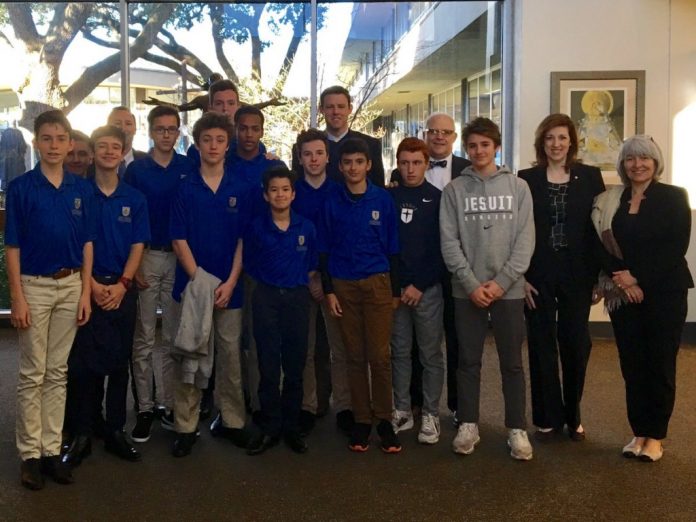 “Boy, those French! They have a different word for everything.” – Steve Martin, Comedian, Writer, Actor, and Musician.

From February 2nd to February 17th, Jesuit hosted twelve French students from Le Caousou, a Jesuit school in Toulouse, France. A group of Dallas Jesuit students traveled to Toulouse to experience life in France. One chaperone left with each group to watch over the students and to oversee the program. When the French students came to Dallas, there were host families who took a student into their home for the two-week period and helped them experience life in America.

One of the many Jesuit students who hosted a French student, Dawson Moore ‘18, discussed his experience with the exchange student, saying, “it is interesting having a French student living with me because he is much like a younger brother.”

During their stay in Texas, the Le Caousou students were introduced to many new places, events, foods, cultures, and more that they might not have back home. Dawson commented on a few of the activities that he and the French student that he was hosting did together. He explained that he and his family “took him to a rodeo, showed him the Super Bowl, played a lot of basketball, and bought him some cowboy boots.”

Although it was a great opportunity to be able to share the experience of living in a different country with someone else, there were some boundaries or obstacles between the host families and the French students. Dawson faced some of these boundaries, but was able to overcome them and still enjoy the time with the exchange student, describing that “though he spoke English very well, we would sometimes have to speak slower or use Google Translate to help him speak to us.”

Jesuit French teacher, Mrs. Richard, created the program and coordinates it each year. She mentioned that she picked the Le Caousou Jesuit school out of two candidates for schools in France two years ago. She and her counterpart “look at how everybody is, what their interests are, and then we look at the age of the student…we make sure that students are in good standing academically.” Along with setting up the host families for all of the French students, she also plans the activities that take place outside of school. Mrs. Richard described the kinds of activities she plans for the students and host families to do together: “We always include two days of service with the seniors… We went to the Fort Worth Rodeo and we did the JFK Six Ford Museum, we went to Klyde Warren Park for lunch… A lot of the guys got together and did a tour of AT&T Stadium… Almost everybody went to the Perot, everybody went shopping… There were some kids that went to do paintball… [They went to] Reunion Tower, even Dave and Busters, and a SuperBowl Party.”

Mrs. Richard also commented on the differences between life as a Dallas Jesuit student and life as a Le Caousou Jesuit student. She acknowledged how “their school day is very different than our school day. It’s a little bit longer; their lunch break is longer than our lunch break. Their style of class is lecture-based and, compared to our style of teaching,… there is very little class [discussion]… They don’t have school sports; it’s all at the club level… They do have a class where they do low-leveled sports, but they don’t have sports teams that compete against other schools.”

Amaury, a French student who visited Dallas last year, explained his experience in America and compared it to his life in France. He recounted how “France is very [far] away [from] Texas; in France, you can say to your friends ‘come on with me we are going to downtown’… It is so nice because there are a lot of little [streets that are] so cute; you have shops everywhere, all things are small, you see. In Dallas, you don’t have a real downtown where you can [walk]… I saw all [the] activities…around [the] city, and there were a lot of [activities] to do.”

The host students that he stayed with during his visit were Jacob Palisch ‘17 and Connor O’Neill ‘17. He drove around the city, visited many popular places in Dallas, and went to school at Jesuit for a few days. He reflected on some of these activities, saying that “the visit of Cowboys Stadium was wonderful. Kennedy Museum was great too. Doing market shopping…was so nice too. I loved to see Connor running during his competition. At school, it was very nice too. It was very interesting; it is so different [from] France!”

He mentioned what his life is like in Toulouse and at a school, explaining that “in France, we [have] lunch 3 times a day (morning, midday, [night]), not more not less. We cook a lot and it’s very rare when we take things…to eat at home… It’s a little bit [bizarre] in France… Streets are more different in France because in France they are not linear… Texans are in love with their sports teams, and they are very [important]! In France, it is not too important.”

Amaury went on to talk about his thoughts and feelings about the exchange program before and after his visit, how “I thought before coming to Texas there were cowboys, westerns,…desert, horses, a lot of barbecues, meat… I very would like [to] make again this exchange program… It was just wonderful for me and I really want [to have] an American boy at home. I will be so proud to show him France.”

The second annual French exchange program is over, but anyone, not just students in French classes, can sign up to host a French student or travel to France next year.

Mrs. Richard commented on the benefits and considerations of signing up for the program, saying that “you should be willing to take a leap of faith because it’s scary to go into a new culture where you know very few people and it’s a different language… My hope is that [the students] will take away the beauty of France, the cultural aspects we’ll get to see, that they were successful…it needs to be something that they find beneficial, and it costs some money to go as well… I hope that everyone enjoys it and has fun.”