More
JesuitRoundup.org is brought to you by:
The Ashmore Family
Arts Stage & Film Jesuit Stage and Film Kicks off The Great Gatsby
Facebook
Twitter
Email
Print 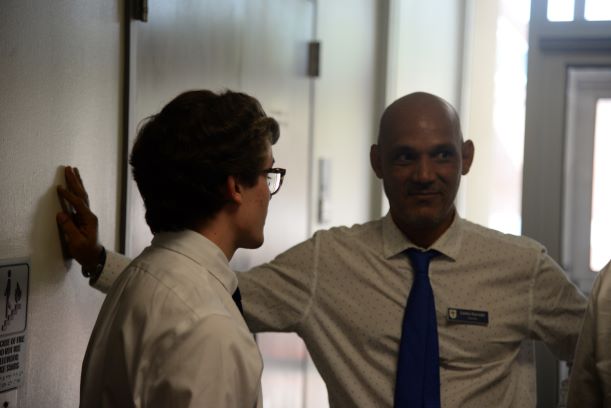 From behind came whispers of chatter among the actors from Jesuit and Ursuline. Awaiting for the show to begin, his chest began beating more rapid and louder as the curtains drawback and the lights flood the stage. Remembering his queue, and taking his first few steps, his heel echos against the stage. Watching for the actor’s first move, the crowd settles in for a great show.

Students from both Jesuit and Ursuline have been preparing for the first play of the year since early September. Practicing for hours after school each day, remembering lines and rehearsing queues, the actors get there a first chance of the year to shine their talents in front of the school on November 1st, 2019. In hopes of an excellent performance this year, the director, Mr. Acevedo, has taken special attention into what he chooses for the students to perform each year as well as his special touches to the script. Not many know about Mr. Acevedo’s talent for writing play scripts.

I had the privilege to sit down with the director, Mr. Acevedo to ask questions about his methods of creating scripts and what he has in store the audience November 1st. 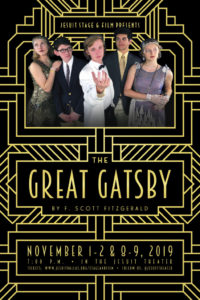 “Is this your first script written by yourself?”

“Of course not, I’ve been writing and acting for more than 20 years of my career. I do original works, annotations, books, and other material. In this case, I have a very strong interest in books that the students here at Jesuit have to study in High school. So I incorporated many books like Great Gatsby, Tom Sawyer, The Outsiders, and The Scarlet Letter into my life and professional career, and so I can allow students to act in them but also receive my input and experience. This duel learning style gives the students a chance to visually see and perform the book as well as reading and analyzing it. So I performed The Gatsby a while back with my professional company. When I wanted to bring Gatsby to the stage at Jesuit, I, of course, read over the book again and watched the movie along with analyzing the direction I wanted to go in a direction suitable for high school students, whether I cut scenes or language out. But I also make the script so that they are lighter and fun for the students to perform. For example, in The Scarlet Letter, it’s a dark book that I try to adjust so that there is some humor so that the audience can feel the transition of tense scenes to relieving moments of laughter, similar to movie stars.

“Do you read and analyze the books the same way students do?”

“Yes, I usually read the book and mark up favorite scenes I picture using, as well as traveling through the internet and digging up extra information. Interestingly, Gatsby was a more straightforward or more direct book, in the sense that I picked dialog that would adapt well to the theater.

“Are there any aspects you would like to highlight about the play?”

“I want to bring to Jesuit practices and skills that I picked up while working for my professional company, like bringing American Classic’s like The Outsiders and Gatsby to stage. Hopefully, we can bring more books that the students read in the classrooms and bring them to life on stage, giving them a different perspective of the book.

“Are there any fun facts the audience should know about the production of Great Gatsby?”

“This year, we were able to able to get students to participate in the sound and music of the production, I won’t give away who performed almost 90% of the music production, but we had one student who recorded and scored the effects. Also, we will have two students that will be live sound on stage!”