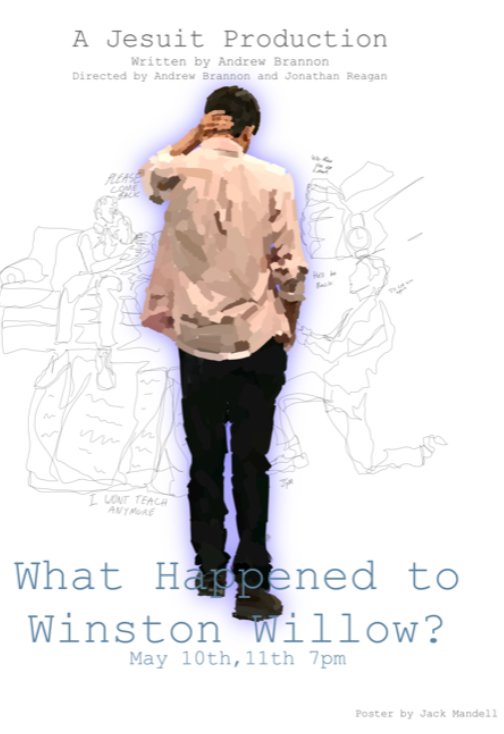 The lights dim in the auditorium, and people begin to scuttle to their seats in the dark. The hum of conversation dies down, and silence fills the room. Suddenly, a glaring spotlight appears on the stage, directing the audience’s attention to center stage as the play begins. This dramatic sequence signals the beginning of an original Jesuit Stage and Film production, What Happened to Winston Willow?

In the words of Stage and Film director Mr. Acevedo, the play is “about the different stages in life that people naturally go through. It’s about growing up, moving on, and building long lasting memories in the road to adulthood. After being close to someone for years in high school, the senior moves on to college, and the rest of us are left with the memories of that person. In the play, Winston Willow has been missing for days, then weeks, and then months, and the people close to him (his friends, his love interest, a teacher, and others) are left wondering what happened to him, where he is, if he’s alive, and why he just vanished. There are a lot of questions without answers. Change is difficult for us all, and the road is unknown for those who stay. By the end, we find out that Winston is alive and well, he just moved to his next stage in life. And those left behind will always remember and love him for what he brought to their lives.”

Actor Daniel Moore ’20 elaborated on his experience in the play:

“It was really interesting to be a part of a play completely composed and run by students. It was very moving to know that this whole play was written by Andrew Brannon, someone just a year older than me given how great it unfolded and was. He and Johnny Reagan did a fantastic job and worked super hard to make this play as good as possible in just a few weeks, something that truly impressed me in particular. And seeing all of the other actors grow stronger in their characters and roles was very entertaining and interesting which really was something to watch indeed.”

The play was well received by the Jesuit community as well, Mr. Armstrong lauding:

“I enjoyed the play. I thought that it was creative and had some moments of real depth and raw elements of real life, human challenges and emotion. I like how it was broken up into four scenes, and how the scenes were strung together and connected well.”

Stay tuned to The Roundup for more Jesuit Stage and Film coverage!