More
JesuitRoundup.org is brought to you by:
The Ashmore Family
Arts Music Men’s Chorus at the Rangers
Facebook
Twitter
Email
Print 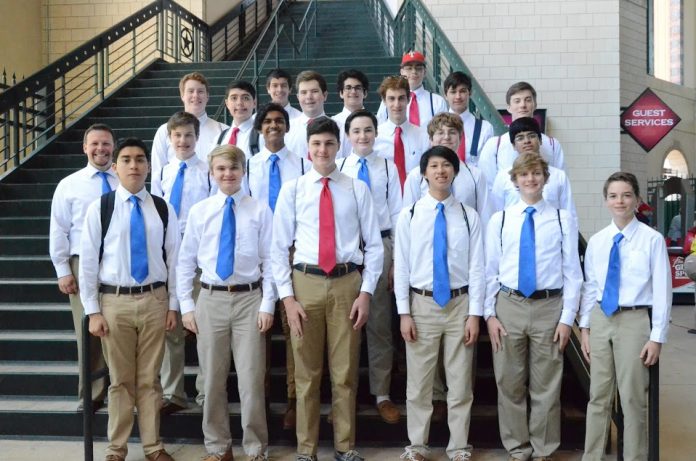 Let’s start from the beginning. Two months ago, Jesuit’s athletic director asked the men’s chorus if they would be willing to sing at a Rangers game. “It’s nice to know the athletic department regards us highly,” commented Crownover. The choir immediately took athletics up on the offer and began rehearsing. Men’s Chorus rehearsed arduously for two months, a couple times a week and then every day at lunch to prepare.

“I’d say the arrangement is a moderate difficulty,” explained Crownover. “It’s not too challenging or too elaborate, but not so simple that it would be boring. I think it’s exactly the right level for our men’s chorus to showcase their talents and abilities.”

Patrick Rodenbaugh ‘18, a member of the chorus, concurred, “This is something that I’d probably never get to do otherwise.”

For all their hard work, all 22 singers along with Mr. Crownover received complimentary tickets for the game against the Kansas City Royals.

On the day of, the men’s chorus met at Jesuit to rehearse and enjoy some much appreciated donuts. They then took the bus to the stadium in Arlington. Rangers staff accompanied the choir under the stadium, ‘behind the scenes,’ where they would have one last rehearsal in the Ranger’s PR room and finally step out onto the field.

“It was really fun to get to go to the press conference room where all the athletes and famous people stood and to line up in the tunnel and walk into the stadium,” commented Crownover.

“Underneath the stadium was possibly the best part,” said Dayton.  “We were able to see directly into the Ranger’s dugout and saw some bullpen pitchers walking in front of us.”

Finally the chorus walked out onto the field. It “was the most surreal moment of all,” said Crownover.

“I thought the Men’s Chorus did a spectacular job of the national anthem,” commented Rachel Pierce, an Ursuline sophomore who attended the game. “Mr. Crownover has definitely done a great job growing their talents.”

Crownover agreed, “I thought the performance went fantastic. The boys did an amazing job, especially in a new environment in front of a large crowd and having to deal with echo from the sound system they did wonderful.”

After the performance, the choir got to sit back, relax, and enjoy a 5-2 victory over the Royals.

“If we are asked to do it again we would love to. It was a huge honor and if the Jesuit family day happens at the Rangers again and they want us back, then we’ll be the first ones to say yes,” added Crownover.

In the meantime, the Men’s Chorus has its final performance of the year on Wednesday at the Spring Concert with the Band. “If you didn’t get a chance to see our boys perform the star spangled banner, come out to our concert next week and we’re going to have a performance of it at our concert,” Crownover concluded. “So if you missed it at the Texas Rangers come out and see it live and there’ll be a lot of other great hits including take me out to the ball game.”